Self-described “prophet” Jeremiah Johnson was a recent guest on the show It’s Supernatural — one of our favorites — to discuss a dream he had, in which he saw Donald Trump looking at himself in the mirror… but seeing the reflection of Abraham Lincoln instead.

It’s hilarious enough to think the man currently on the brink of starting WWIII would ever be considered on par with the man who kept the country whole. But Johnson’s justification for it somehow made things even worse:

“The Lord said to me, ‘It will be the gray hairs and the white hairs that will determine the future of America,’” Johnson said. “God has raised up Trump to confront and to issue an Emancipation Proclamation, so I believe that baby boomers for Trump are going to arise in this nation. They have a standard of morality, they understand the history of our country. As a millennial, Sid, I’m just here as a son to say, ‘Go, baby boomers, go.’”

What does that even mean?! Freeing aborted fetuses sounds like something out of a horror movie, not a scene from some conservative Christian utopia.

In any case, he’s putting a lot of faith in a generation that broke the country.

Johnson said nothing, of course, about how those “moral” Boomers will help families struggling with rent or preventing millions of children from going to bed hungry. The Bible has far more to say about feeding the poor and welcoming the immigrant than any scientific commentary on when, exactly, life begins in the womb.

Not that Johnson would know anything about that. 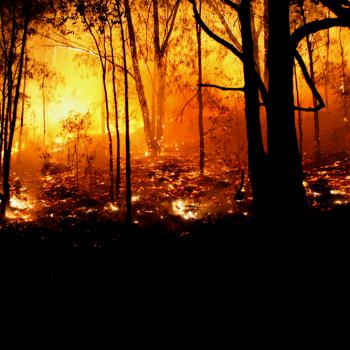 January 8, 2020 Mormon Group Claims Its Prayer Event Made It Rain in Australia
Browse Our Archives
What Are Your Thoughts?leave a comment