So everything is great… until the moment you need them the most. They don’t all work the same way, but that’s the gist. There have been multiple articles written about customers who were denied help precisely when they expected to receive it.

The latest comes from the New York Times‘ Reed Abelson, who looks at how some of these Christian groups are so awful that some states are taking legal action to prevent them from offering garbage plans to residents.

… state regulators in New Hampshire, Colorado and Texas are beginning to question some of the ministries’ aggressive marketing tactics, often using call centers, and said in some cases people who joined them were misled or did not understand how little coverage they would receive if they or a family member had a catastrophic illness.

The article notes that Washington has fined Trinity Healthshare and banned it in the state. Even Texas has sued Aliera Healthcare, which promoted Trinity’s products.

Families who have joined the groups recount winding up with medical bills not covered by the ministries, with no legal way to appeal decisions to reject coverage for care. Some groups ask their members to push hospitals and doctors to write off their bills rather than use members’ money to pay their expenses.

“These plans offer a false sense of security,” said Jenny Chumbley Hogue, who runs an insurance agency in the north Dallas area of Texas. She refuses to offer them to her clients.

There’s no better description of religion than a worthless plan offering a “false sense of security.”

As I’ve said before, there are plenty of problems with the insurance industry, in large part due to sabotage by Republicans who have undermined the protections that were written into the Affordable Care Act. But Christian insurance companies manage to magnify those problems with a religious twist. You’re a fool if you trust them. It’s just too bad the members are the ones who get screwed over. Those are the same members, I would gather, who were duped into believing the ACA (as intended) was bad for them and who continue to push back against the idea of single-payer systems. 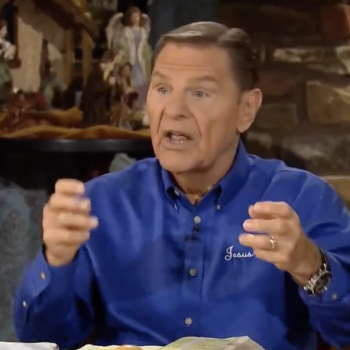 January 2, 2020
Televangelist Kenneth Copeland: Trump's Behavior Is "None of Your Business"
Next Post

January 3, 2020 Preacher Accused of Sex Perversion Deemed "Not Qualified" to Run Ministry
Browse Our Archives
What Are Your Thoughts?leave a comment