In a perfect storm of religion, politics, white evangelical wish fulfillment, and the White House’s never-ending Persecution Complex, Donald Trump retweeted an image that said President Obama kicked Jesus out but Trump brought Him back.

The retweet comes on the heels of a Christianity Today editorial calling for Trump’s removal from office for being, among other things, “profoundly immoral.”

To be clear, Obama embraced Christianity in the sense that he openly talked about his personal faith, frequently used religious language in his speeches, and kept an open door for various religious groups (including Christians) throughout his administration.

Trump has torn refugee families apart, surrounded himself with yes-men who never challenge his corruption, embraced ignorance, hurt LGBTQ people with his policies, and continues to be a living embodiment of the worst America has to offer the world. So, naturally, white evangelicals have embraced him as one of their own.

The retweet merely spread the myth that Trump is somehow good for Christians while Obama was an enemy of it.

Thankfully, Twitter was merciless in pointing out how ludicrous it was:

Looks like that Jesus would be held in a cage at the border under this Admin.

A foreign fella wearing a dress!!! No entry.

Is He bringing us your tax returns in that luggage? Straight from heaven to your impeachment trial? Awesome!

YOU. ARE. AGAINST. EVERY. THING. JESUS. EVER. TAUGHT. pic.twitter.com/Q2q3fXdE3E

They have a point. If a brown-skinned, Middle Eastern refugee with long hair suddenly appeared in front of Trump’s most devoted followers today, they’d likely call ICE before offering Him a safe haven in their homes. 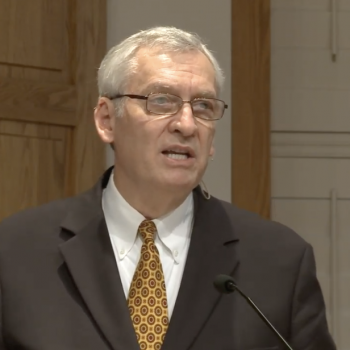 December 28, 2019 This Cowardly Evangelical Leader Has Opted for Silence in the Age of Trump
Browse Our Archives
What Are Your Thoughts?leave a comment