“Axial Tilt is the Reason for the Season” Billboard Goes Up in Colorado December 25, 2019 Hemant Mehta

The Western Colorado Atheists and Freethinkers have placed a digital billboard in Grand Junction reminding everyone of the real cause for celebration this time of year: “Axial tilt is the reason for the season.”

They have a knack for these holiday billboards. Last year, the same group put one up reading, “Make Christmas Great Again… Skip Church!” They’ve put up this one before, too.

The billboard is only up this week, but it’s already attracting local media attention. That means a chance to remind the community that there are non-Christians out there this time of year and they shouldn’t be forgotten either.

“[It’s] winter solstice at this time of year, which is the shortest day of the year. It’s the point after which the days start getting longer as we head back towards summer,” says [WCA founder Anne] Landman, “There’s just a growing proportion of people who don’t follow that religion. The population of people in the United States who don’t identify with any organized religion and who identify as atheist agnostic or none of the above is now at about 26%.”

The billboard is tongue in cheek, meant to be funny, not attack Christians, but rest assured someone will pretend to be very very upset about this. They always show up. 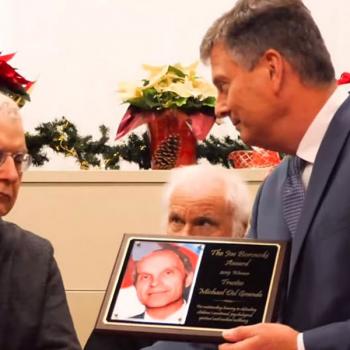