Dave Daubenmire: No One Has It Worse in America Than Vocal Christian Men December 3, 2019 Hemant Mehta

Dave Daubenmire: No One Has It Worse in America Than Vocal Christian Men

Who are the most discriminated people in America?

You guessed it! Christian men. They have it soooooo rough, according to right-wing commentator Dave Daubenmire:

Do you know who the most discriminated-against people in America are? Christian men like Dave Daubenmire. pic.twitter.com/5MZ5YkpiIr

Yes, maybe one day, a Christian male will finally become president. We can all dream…

As one sarcastic commenter on Twitter pointed out, “How often has he been pulled over for driving while Christian?”

It’s always telling when the people with both platforms and power spend all their time complaining about how tough they have it, especially when they spend all their time making sure no one else ever makes any headway. They oppose LGBTQ rights, promote White Nationalism, condemn Islam and atheism, etc. Then they pretend that Christians are the real victims.

The truth is: If everyone else treated Christians the way these Christians treat everyone else, they would be the first ones complaining about persecution. That’s how ignorant they are about their place in society.

Daubenmire isn’t persecuted. He just can’t escape the consequences of his own stupidity. And he can’t tell the difference between the two. 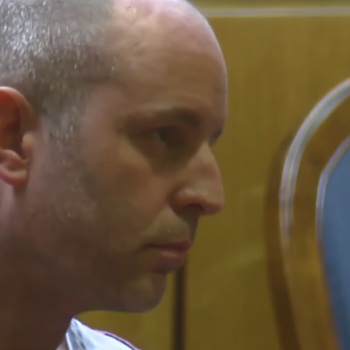