End Times broadcaster and professional anti-Semite Rick Wiles has his own theory about why there are impeachment proceedings against Donald Trump.

It has nothing to do with legitimate evidence of corruption.

“That’s the way the Jews work, they are deceivers, they plot, they lie, they do whatever they have to do to accomplish their political agenda,” Wiles said. “This ‘impeach Trump’ effort is a Jew coup and the American people better wake up to it really fast because this thing is moving now toward a vote in the House and then a trial in the Senate. We could have a trial before Christmas. This country could be in civil war at Christmastime. Members of the U.S. military are going to have to take a stand just like they did in the 1860s with the Civil War. They are going to have to decide: are you fighting for the North or the South?”

“People are going to be forced, possibly by this Christmas, to take a stand because of this Jew coup in the United States,” he added. “This is a coup led by Jews to overthrow the constitutionally elected president of the United States and it’s beyond removing Donald Trump, it’s removing you and me. That’s what’s at the heart of it.”

“You have been taken over by a Jewish cabal,” Wiles continued. “The church of Jesus Christ, you’re next. Get it through your head! They’re coming for you. There will be a purge. That’s the next thing that happens when Jews take over a country, they kill millions of Christians.”

Logic is, of course, no part of Wiles’ thought process. Plenty of Christians want Trump impeached, too, but he conveniently ignores that. When all the evidence is tossed out because it’s inconvenient, the Jews are the next best scapegoat. Always have been.

Have we mentioned that Rick Wiles has press credentials at the White House? 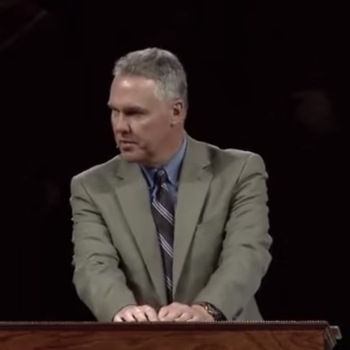 November 26, 2019
Pastor: The Southern Baptist Convention Is Too Liberal, So We're Leaving
Next Post