Last week, a transgender flag flew atop the Iowa Capitol building in honor of the Transgender Day of Remembrance, making it the first state to do that. Some conservative Christian lawmakers, of course, weren’t happy. Some, like State Rep. Skyler Wheeler, went so far as to call the symbolic gesture part of a “rainbow jihad.”

He made the comments to a right-wing publication:

“I found out the same time as most Iowans,” he said. “Nothing was sent to my legislative email, no phone call, absolutely nothing. It’s another way that the Rainbow Jihad continues to give those of us who don’t agree with them a finger in the eye and push their beliefs on us.”

“Flags flown at our state Capitol should not be flags that fuel division among Iowans,” Wheeler said. “How would the Rainbow Jihad react if we were trying to fly the Christian flag over the state Capitol? The Rainbow Jihad is not OK with simply living their lives. They are so hellbent on pushing their beliefs on us that they would go so far as to fly that flag over the state Capitol. It’s one of the most egregious acts of political aggression I’ve ever seen.”

It’s unclear how a trans flag pushes anything on anyone… other than the idea that we should pay respects to trans people who have died because of who they are. Apparently, that violates Wheeler’s beliefs. Unlike a Christian flag which is meant to suggest government favoritism of a particular religion, directly violating the First Amendment, the trans flag is simply a statement of respect.

And while Wheeler and fellow Republican State Rep. Dean Fisher are complaining, Iowa Safe Schools, which requested that the flag be flown, went through all the proper procedures to have their request approved, including petitioning the Iowa Department of Administrative Services. The flag flew for a grand total of five minutes.

That was too much for Wheeler, who thinks that’s tantamount to terrorism.

Wheeler, by the way, is no stranger to irrational statements promoting his beliefs. Two years ago, he defended an anti-science bill by insisting climate change and evolution were “just theories.” He also co-sponsored a bill allowing public schools to teach Bible classes, but shot down an amendment allowing similar classes for the Qur’an because “the Bible is different.” So there.

But a trans flag flying for five minutes? That’s “one of the most egregious acts of political aggression” ever. 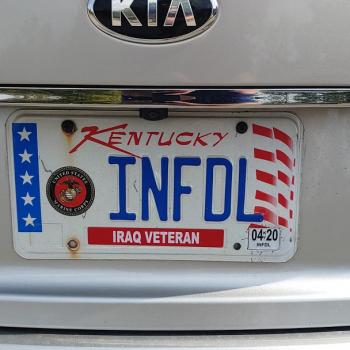 November 27, 2019 Iraq War Veteran Sues Kentucky After They Reject His "INFDL" License Plate
Browse Our Archives
What Are Your Thoughts?leave a comment