In a country with far too many unquestioning supporters of Donald Trump, and evangelical Christians who celebrate the wealthy (like say, Joel Osteen and Kanye West), and those who hate atheists only slightly less than they do LGBTQ people, it’s nice to see communities band together to help those who can’t always help themselves.

That’s what the Atheist Community of Lubbock did on Sunday.

Rather than tithing to some local church that may or may not help struggling people, group members held the organization’s very first “No Strings Attached” Homeless Outreach Event, providing people who are down on their luck with items they all need most: food, clothes, personal hygiene items, blankets, sleeping bags, and — perhaps most important — human kindness. The event turned out to be a rousing success, providing 120 people (“40% of the local homeless population,” they say) with the things they need to make their lives a little easier.

As someone who has lived homeless in Texas, I can tell you how brutal the winters can be in this state. My husband and I lived through flash floods with hail the size of golfballs. We’ve lived homeless in seven different states, and have persevered through ice storms, snow, pneumonia, crushing heat, and police. So kudos to these kind-hearted atheists for showing the community that you don’t have to be religious to be caring.

Their actions brought together local businesses, scores of volunteers, and enough donations (about $1,200) to make this work. They also advertised the event via Facebook, a billboard, and flyers.

In the days that followed we were all stunned at the incredible response from [Lubbock] citizens. Many people had heard about our event and reached out to help. We had donations pouring in, and volunteers signing up by the boatload. We were excited to see so many people supporting us, but we still didn’t know if we would have enough people at the event to serve.

Even cold and wind couldn’t keep people away from Mose Hood park, where it was held. The park is a haven for many homeless people.

We wanted to go to them, and not make them have to come to us. We didn’t want to alienate the people staying in shelters though, so we designated a few volunteers to go out to the shelters to pick people up and bring them to the event.

It’s not unusual for some of the more extreme right-wing Christians to paint atheists as demonic, eager to destroy America or upend the First Amendment. We know those are lies, but events like these make that point more clearly than some online rebuttal.

Our volunteers were eager and ready to help. What we kept hearing from so many people is that they were grateful for an opportunity to volunteer for an organization that represented them. There was no pressure to act religious, it was a opening and welcoming environment.

It is important to us that we make people feel human, that we connect with them at our events, so we had several volunteers whose job it was to just simply engage in conversation with people. We got to know them on a personal level, and we even had one person comment “You guys are actually friendly, at other places, they act friendly, but you know its always cause they want you go to their church or something.”

There was no bait and switch here. There was no tacit goal of getting people to join the group. It’s just kindness and generosity from people who understand God’s not going to fix these problems.

If you’d like to support the group’s work, you can do so here and here. 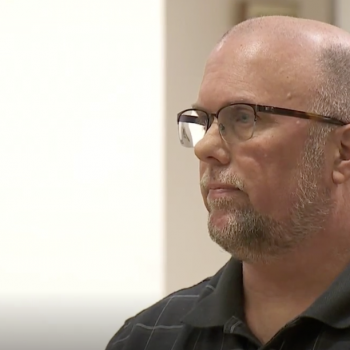 November 19, 2019
Pastor Admits to Stealing $40,000 From Victims of Deadly Landslide
Next Post

November 19, 2019 Ark Encounter Ticket Sales Went Slightly Down in October
Browse Our Archives
What Are Your Thoughts?leave a comment