Pastor: Ron Reagan Said He Wasn’t Afraid of Hell Because He Secretly Is! November 10, 2019 Hemant Mehta

Pastor: Ron Reagan Said He Wasn’t Afraid of Hell Because He Secretly Is!

During last month’s Democratic presidential debate, the Freedom From Religion Foundation aired a commercial featuring Ron Reagan. The son of the former president said he’s a “lifelong atheist, not afraid of burning in hell.”

Even though that ad’s been around for years, and still appears during random episodes of The Daily Show or 60 Minutes, the fact that it played during the debate led to outsized attention, including criticisms from the likes of evangelist Franklin Graham.

Christian hate-pastor Steven Anderson got in on the action yesterday, too. During a sermon, he offered his own theory about why Reagan would bother saying he’s not afraid of burning in Hell.

Why say that? You know why? ‘Cause he is scared…

All of the atheists’ anger is directed at Christianity! Right?…

This is only the latest example of Anderson talking out of his ass about something he doesn’t understand.

The commercial is about the intrusion of Christianity into our government (and why supporting FFRF is a way to push back against that). Reagan doesn’t believe in those other forms of nonsense either, but Hindus aren’t trying to take over the White House. Right-wing evangelicals are. Saying they need to be stopped — and that you’re not afraid of their biggest threat — is a reasonable response.

But Anderson’s Persecution Complex is so large that he can’t envision any reason for Reagan to dismiss Hell other than trying to convince himself of it because, in private, he knows he’ll burn forever. That’s some serious Christian wish fulfillment for you. 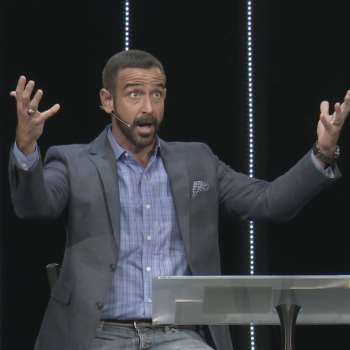 November 10, 2019
Years After a Pastor Abused Them, Two Women Speak Out Before He Gets a Promotion
Next Post 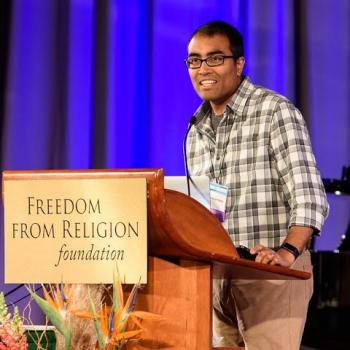