The Nassau County School District in Florida held an assembly this past August at Fernandina High School urging students to make wise decisions. The program was put on by the Christian ministry FutureNow. That’s why parents complained, and it’s why the Freedom From Religion Foundation and the ACLU of Florida are now getting involved.

Had people at the district done even cursory Googling, they would have found that the organization was founded by former youth pastors who wanted to indoctrinate children in public schools, so they developed this program to get access to those kids. The way it works is that they conduct a secular program during the school day while inviting kids back to an evening presentation… which is heavy on the proselytizing.

“That’s where we present the salvation message, and we had 18 respond to the altar call. Over there, it’s really different because so many kids don’t go to church and don’t know who Jesus is. When we came to the school assembly programs, it helped us to connect with the students so they wanted to hear more of what we had to say.”

“It makes a difference when you personally invite them to come,” Victoria [Musgrove, daughter of the co-founders] added.

Want more evidence for how shady they are? Their public website doesn’t say anything about what they do — including any connection to Christianity — unless you specifically ask for that information.

So what happened at Fernandina High School?

According to the letter from FFRF and the ACLU of Florida,

… All students were instructed to report to the gym during sixth period, where FutureNow led an hour-long assembly. During the assembly, FutureNow representatives reportedly discussed drug and alcohol use, bullying, and abstinence, and repeatedly urged students to “come back tonight” to the evening event to “make a plan for their lives.” Students were further enticed to attend the evening event by promises of prize giveaways. Both the in-school program and the after-school evangelical event were listed on the school’s August 2019 calendar of scheduled school events and the principal’s Sunday Evening Announcement for the week of August 19…

That evening event featured “proselytizing and an altar call.”

Allowing a self-proclaimed group of evangelists even one-time access during school hours to recruit students for a religious conversion event thus violates the Establishment Clause. District officials have a constitutional duty to perform due diligence when inviting speakers to pitch their messages to a captive audience of public-school students. The district failed to meet its obligations here.

You can see the bragging about a separate evening event on their Facebook page:

And yet if you read the local news coverage of this assembly, there’s no mention of the altar call or the proselytizing. One outlet quotes an ignorant parent saying, “I don’t think it has anything to do with religion”… as if her misguided opinion should be taken seriously.

A religious ministry that works by conducting a bait and switch should never be invited to a public school. What they’re doing is blatantly illegal. If the Nassau County School District doesn’t put a policy in place to prevent this, the only answer may be getting The Satanic Temple to develop an identical daytime program in order to share the joy of Satan with families at a second event (where they can win prizes).

For now, the district says there are no plans to bring back FutureNow. But they need to adopt a stricter policy that ensures groups just like FutureNow won’t be allowed in front of students either. 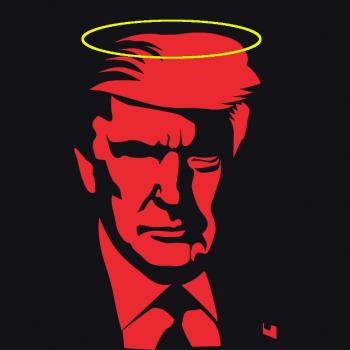 November 2, 2019 Podcast Ep. 294: You Are Not Chewed Gum
Browse Our Archives
What Are Your Thoughts?leave a comment