Sen. Elizabeth Warren said during a town hall meeting in Cedar Falls, Iowa last night that she would think about hiring a staffer whose sole job would be to connect with Americans who aren’t religious.

Among the Democratic presidential candidates who have hired “faith outreach directors” to communicate specifically with religious voters are Pete Buttigieg and Cory Booker. There’s nothing wrong with that, per se. There are a lot of religious voters who connect to candidates predominantly through the lens of faith, and if candidates can capitalize on that, they’d be fools not to hire someone to form that bond. (That’s different from creating policy based on one religion.)

But so far, no candidate has hired a “Secular Outreach Director.” That also seems foolish given that roughly a third of Democratic voters are non-religious. You would think more Democrats would be eager to make sure those harder-to-reach secular voters are aware of their evidence-based policies and commitment to science and church/state separation.

Last night, atheist activist Justin Scott, the Iowa State Director for American Atheists, had the chance to ask Warren, among the front-runners for the Democratic nomination, if she’d consider hiring someone specifically to reach out to people without faith.

While she didn’t give a straight answer at first — it seemed clear she’d never even considered the idea before — she later said she would at least consider it. You can watch the exchange around the 55:20 mark:

SCOTT: I am a lifelong Iowan and I’m also an atheist.

SCOTT: Any atheists in the room? [Applause] For the longest time, at least as long as back as I have been able to vote, candidates seen to always pander to the religious voter, especially the Religious Right. There is a huge opportunity in this election for some candidate, or all the candidates, to harness the power of the atheist voter. Last estimates, there’s about 80-100 million of us that are unaffiliated with the political side [I think he meant “religion”], if you will. I’m curious today, if you’re willing to commit to hiring a secular outreach director. Many campaigns will hire a religious outreach director. I think it would be fantastic for our country to bring all those voices in, to bring all voters in.

WARREN: So that’s a really interesting question, Justin! I hadn’t thought of that!… Because I haven’t done either one.

But let me say something because I think it’s important. You’re an atheist. I’m a Methodist. But I grew up in a church that the first thing I ever learned was about the value of every single person. It was everything I learned. I’m not saying every Methodist is like that; that’s not my job, is to talk about all of them. I’ll tell you what I learned from the time I was little. I was a Sunday School teacher. I taught 5th grade Sunday School. Man, that was an experience. All I can say is no one was injured. [Laughter] Which actually was the bar in that particular 5th grade Sunday School.

But I’m gonna think about that, okay?! It’s a good point! It would be!

Hey, it’s more commitment than we’ve received from any other candidate. (Even Bernie Sanders‘ campaign has only offered lip service so far.)

Justin told me that when he went to get his selfie with Warren — something she’s done with attendees at all her rallies — she was still excited about his idea: 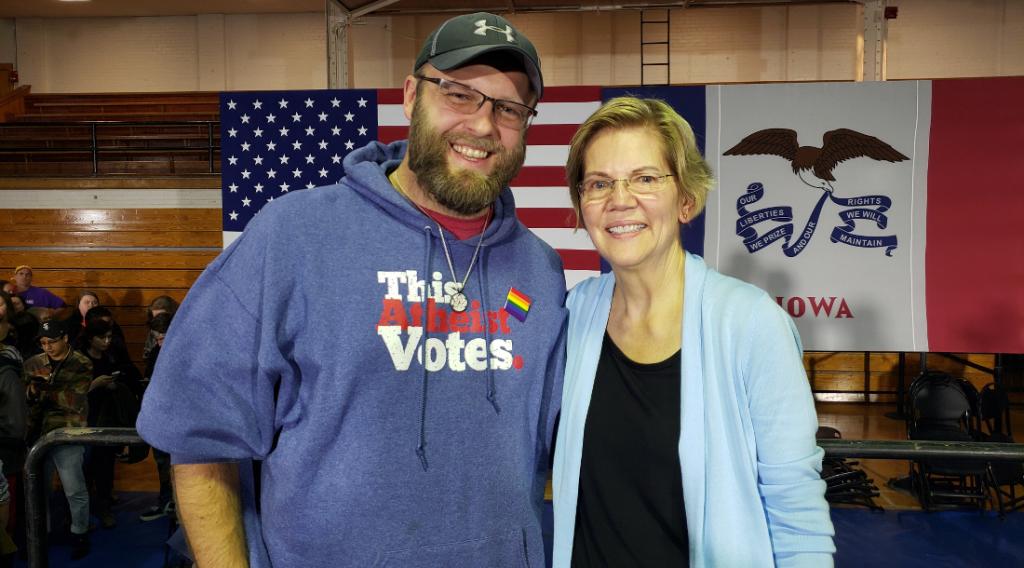 … she was actually still fired up about the idea, putting her arms out towards me and saying what a wonderful idea it was and that she wanted me to connect with her Iowa team to begin discussing the concept. I told her during our photo that taking this on and seeing it through, even if not perfect or perfectly executed, would still be a tremendous first major attempt by a major presidential candidate to speak directly to atheist and nonreligious voters.

After the photo I connected with her Iowa team and told them that I’d be willing to do whatever it took to support them in making this happen, even if only for the final few months before the Iowa caucus but hopefully through the remainder of the race.

If Warren follows through on this, even if she also hired a faith outreach director in the process, it would be the first time a major party candidate shows a serious interest in connecting with atheists, agnostics, and the ever-growing number of Nones in this country. Seriously, it’s ridiculous no campaign has done this yet. Kudos to Justin Scott for asking the question and getting this issue on her radar — and wearing his “This Atheist Votes” hoodie while he did it.

Hire me, Elizabeth. Or hire Justin. Or hire literally anybody. But fill this position.

It would carry tremendous symbolic value and it’d be a wise strategic move for the party in general. It’s not like we can count on the current Republican Party to care about the values most non-religious Americans share. 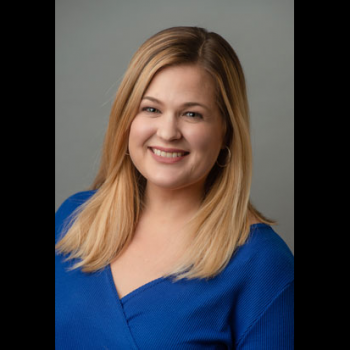