Christian Author: Democrats Are Obsessed with Talking About LGBTQ Issues

Christian author Dr. Michael Brown says there’s a very good reason LGBTQ issues seem to pop up in the news all the time: Democratic presidential candidates like it that way.

Apparently, it has nothing to do with the fact that LGBTQ rights and liberties are constantly under attack under this Republican administration…

Don’t blame me for writing yet another article on LGBT issues. Blame Beto. Or Booker. Or Biden. Or Buttigieg. Or Warren.

The Democratic presidential candidates are pushing this agenda, and quite aggressively at that.

They’re the ones talking about what the Bible allegedly says and does not say about homosexuality.

They’re the ones threatening our religious liberties

They’re the ones wanting to indoctrinate our children.

All we’re doing is responding.

For a man so unusually obsessed with homosexuality, he still doesn’t understand that nobody can “indoctrinate” anyone into a sexual orientation no more than you can “indoctrinate” someone to be left-handed. That’s not how it works.

More to the point, I feel safe saying liberals would be thrilled not to have to talk about inclusive bathrooms or the need for anti-discrimination laws. LGBTQ people would love to not have to defend their humanity all the time. Unfortunately, that’s not a choice they have.

Not that Brown hears that. He’s too busy pretending to be a victim.

They’re the ones telling us we don’t have the right to our biblically based beliefs.

They’re the ones pushing a radical, revisionist agenda.

“They’re the ones telling us we don’t have the right to push our religious beliefs on a society built on the separation of church and state.” There. Fixed it for him.

The battle has been raging since the late 1960s, and the end game of the activists is clear: the Church must be silenced.

Don’t deceive yourself with thinking that any other ending is in sight.

On the contrary, progressive Christians and the non-religious are among the fiercest advocates for free speech, even (and especially) when they find the content of that speech to be reprehensible. Absolutely no one is arguing for churches to be silenced, only that churches shouldn’t have the power to bend the law so it caters to one group’s theology. (There’s a reason The Handmaid’s Tale is the book of our time.)

But if you’re tired of seeing these same talking points over and over, don’t blame me for writing yet another article on LGBTQ issues. Blame Michael Brown, who insists on finding persecution where none exists. 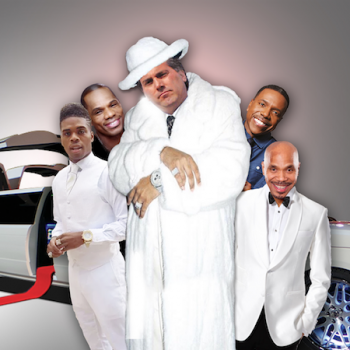 October 22, 2019
White Ministry Owner Under Fire for Sharing Meme of Him "Pimping" Black Pastors
Next Post

October 23, 2019 KY GOP Governor Invites Christian Leaders to His Mansion for Pre-Election Rally
Browse Our Archives
What Are Your Thoughts?leave a comment