Donald Trump‘s “spiritual adviser” Paula White, who recently said she blessed the White House with “the superior blood of Jesus,” told televangelist Jim Bakker that Christians must back Trump in 2020 or else the Bible will be banned as hate speech.

White claimed that the Republican Party’s ability to push judges to federal benches with lifetime appointments was reason enough to back Trump no matter what else was happening. That’s not a bad strategic argument to make to people who don’t give a damn about human rights, the threat of climate change, or a functioning democracy… except White went on to say that those judges would help overturn legislation that bans the Bible.

“If we can change the Supreme Court,” White said, “you don’t think all Hell is trembling right now?”

“They have already passed legislation in states that says the Bible is a book of hate speech,” she baselessly claimed. “It is only a matter of time. Those laws are already passed.”

What legislation is that? Who the hell knows. It’s Paula White, not someone with credibility.

No such legislation exists, and the progressives who support freedom of religion would never go for such a thing. But you can fully expect conservative Christians to mount a defense of Trump’s re-election based solely on his ability to let the Federalist Society and Mitch McConnell take over the nomination and confirmation process. They don’t want anyone thinking about his ignorance, cruelty, or scandals. They’re immoral people who want to pretend they have morals, and the sort of people who take Paula White and Jim Bakker seriously are deluded enough to fall for it. 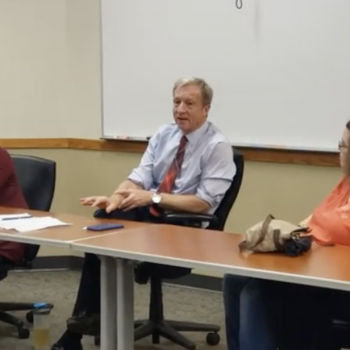