You can always tell how ignorant some Christians are by how they respond to a warning about church/state separation. This story is a perfect example of it.

Last month, Americans United for Separation of Church and State sent a letter to Pike Central High School regarding a “Prayer Locker,” where students could anonymously drop off prayer requests at a locker with a cross on it. The primary issue, AU said, was that it looked like a teacher had set this up.

That’s because the school’s art department literally posted a picture of the locker on Facebook with the line “Thanks Mrs. Good for the idea. I love it!” (Way to be subtle.) 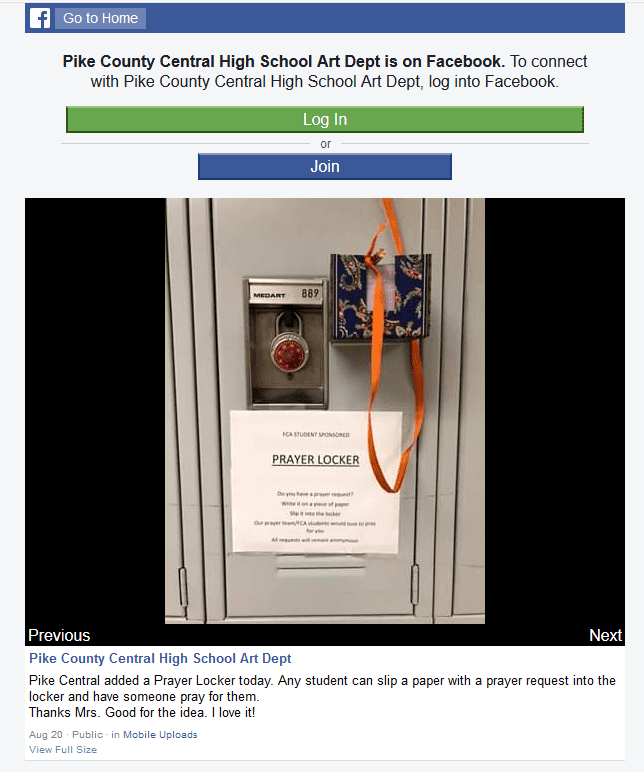 It didn’t matter that the sign on that locker said it’s a “student sponsored” project of the Fellowship of Christian Athletes when the Facebook page suggested a different story. AU attorney Ian Smith added, however, that even without the Facebook post, this would have been problematic.

Placing a display that encourages students to engage in religious activity and endorses the religious activities of the FCA communicates disrespect for students’ and families’ beliefs and sends the message that students who do not practice religion are unwelcome outsiders who do not belong. It also violates the Establishment Clause of the First Amendment in several ways.

Even if the teachers here do not participate in the club’s religious activities directly, erecting a display that encourages students to engage in prayer is still a violation… School employees must not “lend the aura of school sponsorship to the private religious enterprise.”

That sounded odd to me at first. If FCA members wanted to do this on their own, wouldn’t it be okay? Not exactly. A Christian club is, of course, allowed to meet in a public school. But when they start using school property to promote their religious views — a locker, in this case — it can be construed as government endorsement. Just like if FCA students used a school’s public address system to lead a prayer before a football game.

Now, if individual students wanted to turn their lockers into a prayer palace, that would be okay… as long as the school’s policy is that all students can use their lockers in a similar way. (Say hello to “Satanic sanctuaries”…)

That’s what many students at the school are now doing in protest. They’re turning their own lockers into prayer receptacles.

Elkhorn City Baptist Church pastor Aaron Butler said he was inspired by the love of God shown by the kids in his area and wanted to help encourage them to keep pushing for what they believe. So he introduced the “Pray Anyway” campaign.

He said the campaign has nothing to do with the district or any of the faculty or staff employed by the district. It is meant to encourage students to take back the prayer locker idea.

“Instead of having one locker that is an alternative for prayer requests, now we’re asking every Christian kid in Pike County — and the country — to make their locker a prayer locker,” Butler said.

First of all, that’s just a dumb idea. If every locker is a “prayer locker,” then most of these lockers won’t serve any useful purpose. (It’s not like someone is going to write out 50-100 requests and place them in each locker.) In effect, this whole project is just a way to tell Jews and atheists they’re outnumbered.

But also, no one cares. It’s fine. AU doesn’t have a problem with students expressing their personal religious beliefs; their concern is school officials imposing a religious view on people. It’s like your ex saying “We need to break up,” then you responding by dating someone else.

No one cares. You’re doing exactly what we wanted.

“It’s our decision to do it. And it’s our right to do it,” said sophomore Joseph Slone. “It’s the way that we believe. It’s our way of life. And for somebody to just say, ‘Hey, you can’t do that,’ and for us to be forced to abide what they say, it isn’t right.”

So the two say they will be joining the campaign along with some of their friends as they continue practicing what they consider not only their God-given privilege but their government-sanctioned right.

“We think that our rights are being revoked and that’s our way to respond to it,” said Slone.

With plans to “shine His light” through as many prayer lockers as the student body can create.

“We ain’t gonna sit down — lay down — and let them do anything they want to do,” said Slone.

He’s a kid, so his ignorance can be forgiven, but anyone who thinks AU is going to be upset about this has no idea what the law is, or what this controversy was ever about. It was never about banning Christianity or whatever hyperbolic victimhood excuse Christians were offering. I can’t speak for AU, but they’ll likely just mark this case as closed and move on. 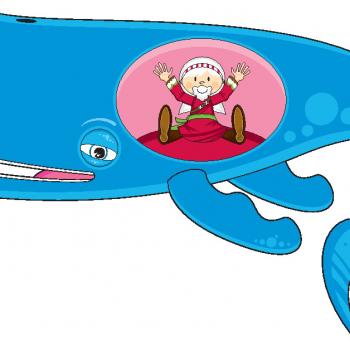 October 15, 2019
An Iowa Public School is Taking Kids to a Christian Play at a Christian College
Next Post 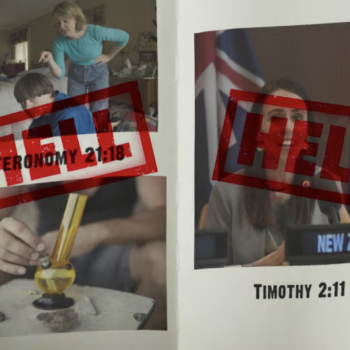 October 15, 2019 This Ad Will Have You Adopting Atheism in No Time
Browse Our Archives
What Are Your Thoughts?leave a comment