Teacher Under Fire for Rebutting Poster Urging Kids to “Pray About Everything” October 11, 2019 Hemant Mehta

On Tuesday, at West Johnston High School in Benson, North Carolina, the Fellowship of Christian Athletes club posted a sign in the hallway encouraging students to pray.

It said “Don’t worry about anything. Instead, pray about everything.” There was also a reference to Philippians 4:6.

Assuming the club was following school rules when it comes to putting up posters, the right reaction would’ve been to laugh at the absurdly simplified version of life depicted in that statement and move on. That said, it’s a student group. The kids are allowed to promote their beliefs in positive ways.

What came as a shock was that a teacher responded to their sign with one of his own. Brian VanDerlaske, awarded Teacher of the Year in Johnston County in 2018, put up this accurate but inappropriate reply: 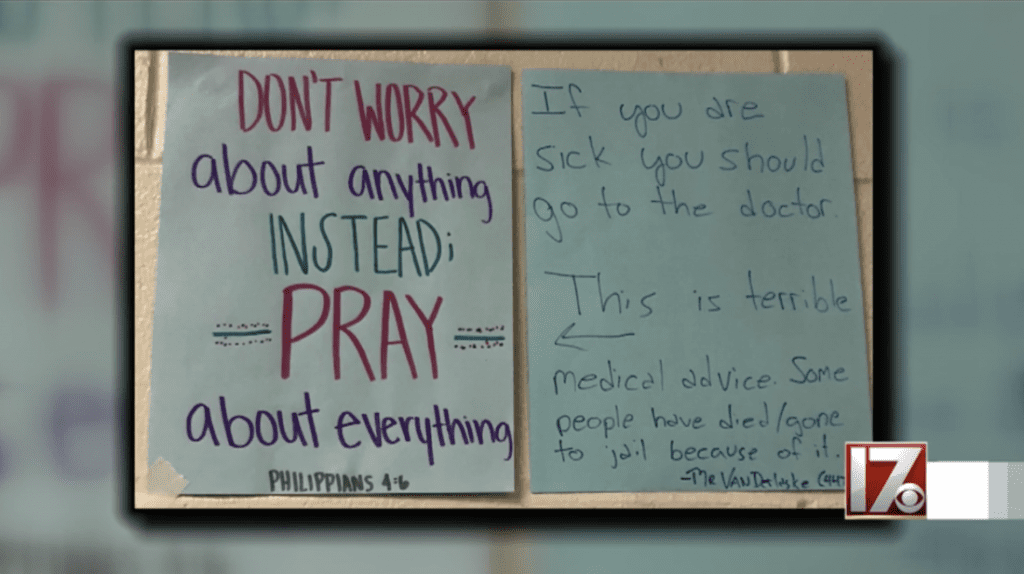 If you are sick you should go to the doctor. This is terrible medical advice. Some people have died/gone to jail because of it.

We know VanDerlaske did it because he signed his name on the poster.

Let’s get this out of the way: He’s right. Prayer isn’t a useful response unless it’s your form of meditation, a way to calm yourself down. It won’t change your grade on a test or help you get into college. It won’t heal a disease. There are far too many stories of parents who used “faith-healing” in response to a baby’s illness, only to have that baby die because it didn’t receive proper medical care.

So the substance of his response was spot-on.

The way it appeared here, however, was completely out of line.

If an atheist club at a high school put up a sign urging people to come to a meeting, and a teacher responded with a Post-it Note saying “Students should find Jesus,” we would rightfully be infuriated. It’s not that teacher’s place to preach. That same logic applies here.

VanDerlaske shouldn’t have responded at all. His job doesn’t allow him to push his religious views on students, much less tell them why their beliefs are silly. There’s a way to discuss religion — and ask probing questions about it — in a classroom setting, but there’s no good way to spin what he did here.

Should he be fired over it? No. That’s a disproportionately over-the-top response. But a public apology might seem fair.

The district has issued a vague statement about how they’re looking into this:

“My staff and I are aware of this situation. We have copies of the social media posts. Our Human Resources Department along with the Area Assistant Superintendent are working with the school principal to fully investigate the facts and decide on an appropriate response.”

If the FCA students wanted some good press, they should defend their teacher’s beliefs and urge him to come to their meetings to learn more about why prayer works for them. I’m not saying they’re right — because the sign’s message is obviously ridiculous — but it would be one hell of a way to capitalize on their teacher’s error.

Incidentally, one commenter on a CBS17 Facebook thread says both sides have already reconciled over this. Take the comment with a grain of salt, but it says the teacher already met with the principal and two students from FCA. He fully apologized for his actions and said he was provoked into responding because “He has suffered illness in his life that almost killed him.” The commenter adds: “Both the teacher and the students were emotional and very compassionate towards each other when they left the meeting.”

(via CBS17. Thanks to Brian for the link) 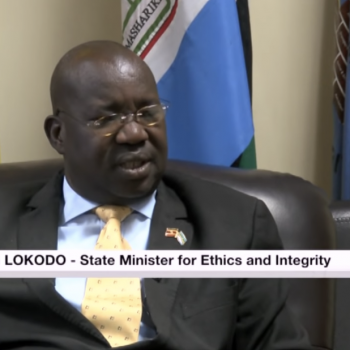 October 11, 2019 Uganda Plans to Bring Back Its Infamous "Kill the Gays" Bill
Browse Our Archives
What Are Your Thoughts?leave a comment