Pastor E.W. Jackson: Democrats Can’t Stop Lying Because the Devil Is Their Daddy

Donald Trump has a well-known predilection for lying, but that’s apparently lost on E.W. Jackson, perhaps one of Trump’s most fervent supporters. The right-wing pastor took time out of his busy schedule of spreading the gospel of homophobia to fear-monger even further by saying that the Democrats are liars because they are the party of the devil.

Jackson made the comments on his radio show this week:

“The Democrat Party is really now made up of a bunch of liars,” Jackson said. “There is a culture of lying that has just taken over the party.”

How he said that with a straight face is anyone’s guess. Though he couldn’t be bothered to cite any examples of this supposed lying.

Jackson then compared Democrats to Karl Marx, whose once suggested lying as a means to a particular positive goal was acceptable. I’m not sure that’s a comparison he wants to make, given that Marx was an atheist who once said religion was the “opium of the people.”

But this kind of logic is lost on people like Jackson, a former Democrat who tried and (fortunately) failed to gain the Republican nomination for a Senate seat in West Virginia in 2018. While he ran, he resorted to Trumpian trickery, complaining that his comments (which are frequently bigoted or absurd) were being taken out of context.

There’s no need to take them out of context when the statements themselves are damning enough. Jackson has denounced gays as “very sick people.” He’s called them “perverted.” Most notably in 2017, he said that if he saw an LGBTQ person giving his child LGBTQ-friendly literature, “he would really need the grace of God not to jump on that person and try to beat them into the ground.”

“Any normal parent would be very, very angry,” he said on his radio program, The Awakening with Bishop E.W. Jackson. “And I think part of the reason why the homosexual community can’t relate is that they can’t really be parents, not in the normal sense. They can manipulate, do some kind of weird gyrations of science and so forth and try to manufacture some children for their own entertainment I suppose, for their own self-aggrandizement, but they cannot procreate.”

During his campaign, he tried to take back these incendiary remarks by saying they shouldn’t be held against him because he said them while hosting his right-wing radio show and wasn’t running for office at the time. In an interview with the Richmond Times-Dispatch, he went back on his inflammatory words and said he would fight for gay or transgendered people if they were being bullied.

His words have a hollow ring to them, though, because as soon as he lost he went right back to attacking LGBTQ people, accusing them of “turning the church into a hunting ground for predators.”

And now he’s attacking Democrats with the very same bigoted brush, using Proverbs 6, a chapter all about how God hates liars.

“Folks, if that is not a description of what the Democrat Party has become, I don’t know what is,” Jackson said. “Jesus said this, ‘Satan is a liar and the father of lie and when he speaks of a lie, he speaks of his own.’ Jesus said to those who denounced him, ‘You are of your father, the Devil, and the deeds of your father, you will do.’ Now folks, I know the leftists and the mainstream media just go all crazy over this, but the reality is that when you see a culture lying like that, of just being willing to stand up and just bold-face tell a lie, and tell multiple lies, and keep telling lies, you are looking at a situation in which the Devil is in control. From a Christian perspective, there is no other way to interpret that, because Jesus said, ‘He’s the father of lies.’ So obviously, that is who their father is because they’re lying just like their father lies.”

It would be more believable if he had any examples of Democrats lying… or if he acknowledged the constant stream of lies coming from the GOP and their standard bearer in the White House. 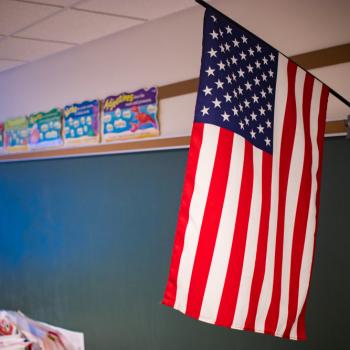 October 9, 2019
NJ School Reassigns Teacher Who Took a Knee During the Pledge of Allegiance
Next Post

October 9, 2019 Ralph Reed: Christians Have a "Moral Obligation" to Support Donald Trump in 2020
Browse Our Archives
What Are Your Thoughts?leave a comment