“The Devil Can’t Hurt You,” Said Mom Before Trying to Kill Her Kids in a Crash October 4, 2019 Hemant Mehta

“The Devil Can’t Hurt You,” Said Mom Before Trying to Kill Her Kids in a Crash

A Florida woman told her four kids to take off their seat belts and wave their hands in the air… before she drove her minivan into a raised median and deliberately crashed into a palm tree.

Calicia Williams been charged with four counts of attempted murder. The condition of all four kids is currently unknown.

And not even for the first time this week, there’s a religious angle to all this. Check out what Williams told her kids just before the crash:

“Detectives spoke with witnesses who advised Williams was traveling at a high rate of speed and told the passengers to take off their seatbelts, stretch out their hands, and stated, ‘The devil can’t hurt you, he only hurts bad people. You have the light of Jesus in you and only Jesus can cure us,’” police said in a press release.

Christ… as we’ve said before, “Jesus take the wheel” is not a piece of advice. God can’t protect you from yourself. For the sake of the children, let’s hope their mother’s delusion was only a temporary setback.

Williams will be heading to Marion County Jail in Ocala as soon as she’s out of the hospital.

(Thanks to Kelsey for the link) 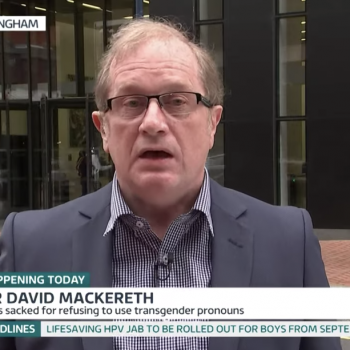 October 4, 2019 UK Court Rules Christian Doctor Has No Right to Misgender Patients for Jesus
Browse Our Archives
What Are Your Thoughts?leave a comment