Survey: 8% of Public School Students Have Had a Teacher Lead the Class in Prayer October 3, 2019 Hemant Mehta

Survey: 8% of Public School Students Have Had a Teacher Lead the Class in Prayer

Nearly 10% of public high school students say their teachers have led the class in prayer, an action that violates the Establishment Clause of the Constitution.

That damning statistic is part of a new report from the Pew Research Center all about teenagers and religion.

Just look at this map: 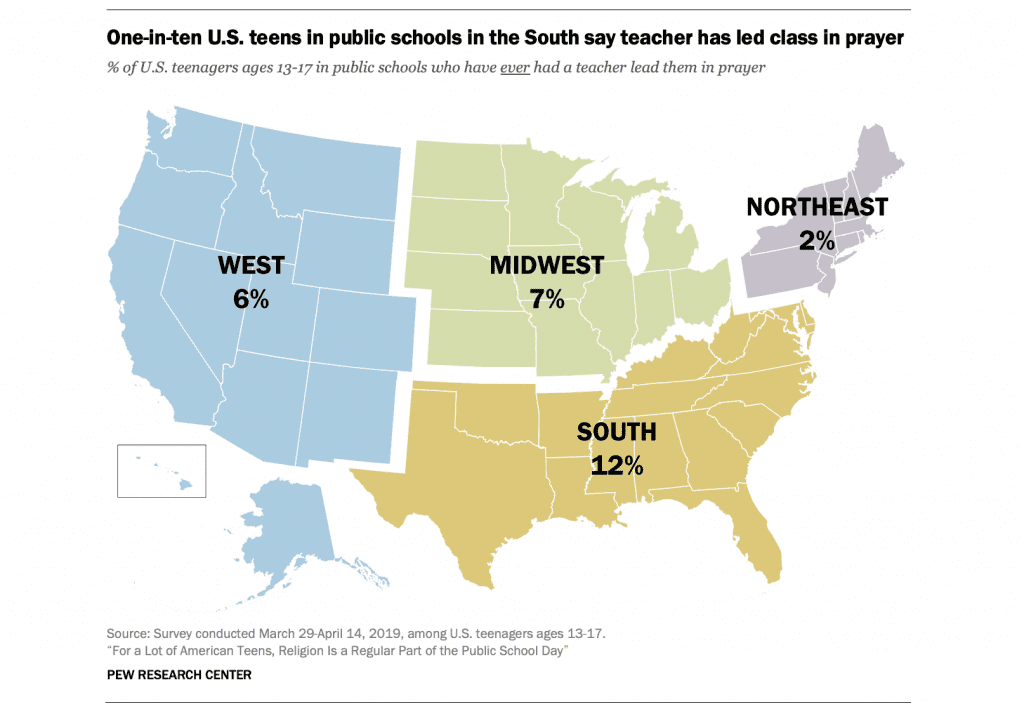 It says that 8% of public school students overall — 12% in the South — have had a teacher lead prayers (presumably Christian ones) in the classroom. It’s lower in other parts of the country, but any number higher than 0% is troubling. Keep in mind there’s an important caveat here: The question asked whether the students have ever had a teacher lead the class in prayer, and it’s possible some kids went to private religious schools when they were younger where that sort of thing would be normal and legal, but the numbers are still disturbing.

Pew also asked the students if they thought it was “appropriate” for teachers to lead the class in prayer. Roughly 40% said yes, including 68% of evangelical Christians.

The irony is that many of them know it’s illegal.

So… nearly a third of public high school students understand the law, yet want their teachers to proselytize in class anyway. Disturbing.

Other parts of the Pew report are cause for optimism. 91% of all students say they rarely or never see their classmates reading religious scripture outside of class, 83% have rarely/never seen kids pray before eating lunch, and 73% have rarely/never seen their classmates invite someone to church. Those are the numbers you’d expect from the least religious generation we’ve ever seen. 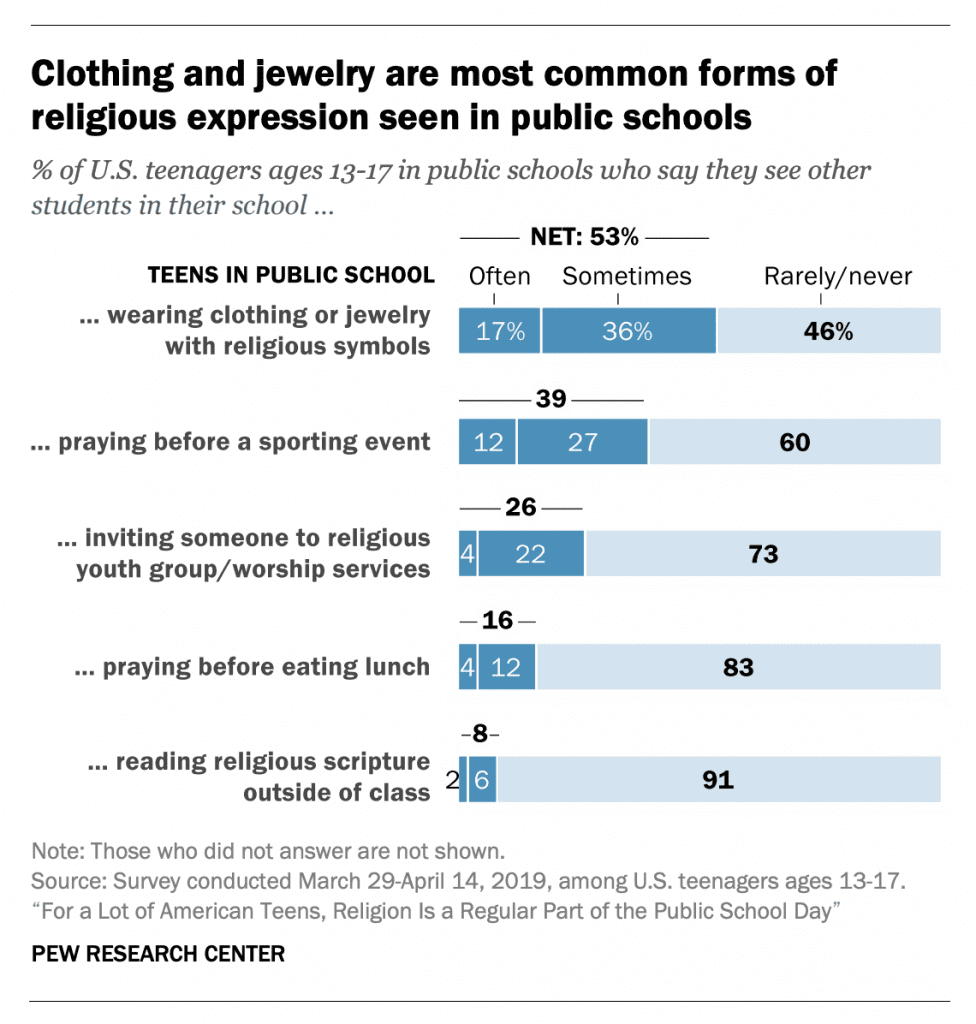 Even among religious teenagers, many say they personally have rarely/never invited someone to church (75%), prayed before eating lunch (73%), or worn religious clothing or jewelry (68%).

One possible explanation is that while many students are not affiliated with a formal religion, those who are often live in areas where Christianity is part of the culture, and they hit all the stops along the way: They pray, their teachers pray, and church is just a second home. Nearly half of all respondents (49%) said they rarely/never did any of the items on Pew’s list or didn’t answer the question.

What about Christian persecution? If you watch enough FOX News, you might think openly Christian students are routinely picked on for their faith. But the numbers say something very different.

When asked if they’ve seen students mocked or bullied specifically because of their religion, 58% of all students said “never” with another 28% saying “rarely.” 17% of evangelicals said they witnessed it often/sometimes, though the survey didn’t ask whether the victims of such bullying were also Christians or what the nature of this “bullying” was. (Is it bullying to say you don’t believe in their God?) Also, 4% of religiously unaffiliated teens said they were bullied for their lack of faith. 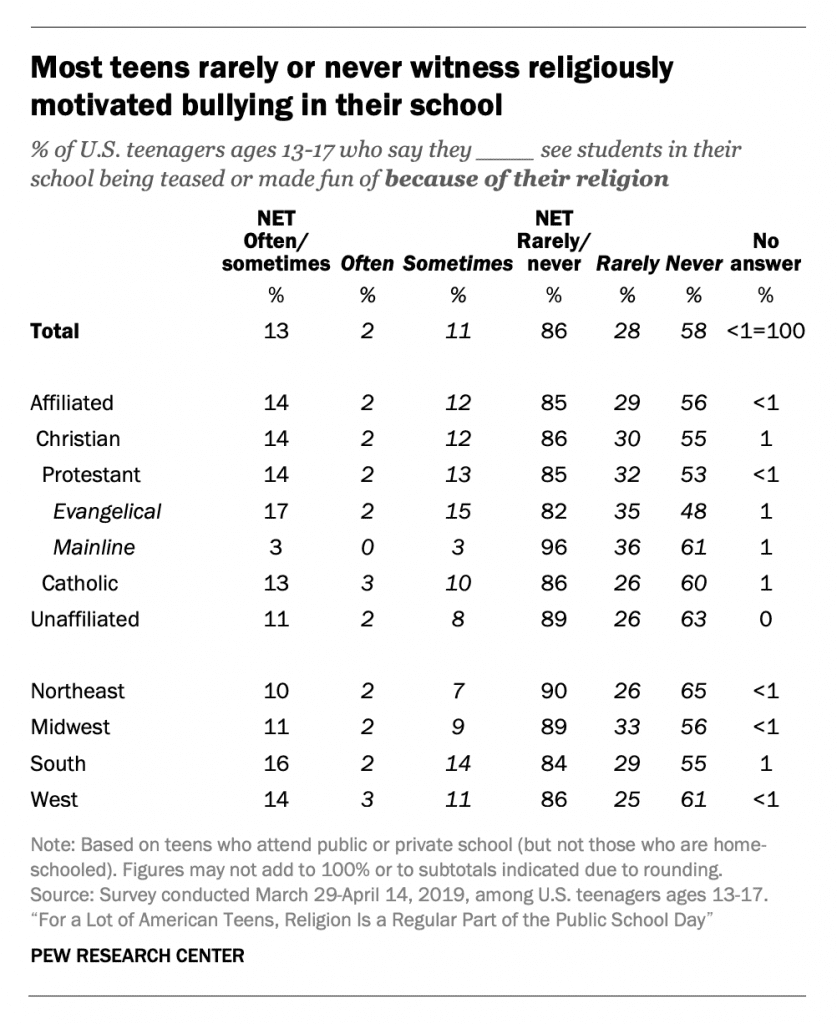 Any number is too high, of course, but bottom line?

Across many demographic groups, most school-attending teens rarely, if ever, see other students being bullied for their religion. There are virtually no differences between boys and girls, younger and older teens, or across regions on this question.

One last thing to point out: The survey asked students if they attended or knew of any religious support group at their school, including groups like the Secular Student Alliance for non-religious people.

Most kids (82%) said such a group didn’t exist at their school — which is almost too hard to believe given the number of Christian clubs in public schools — but the information for non-religious students is something. 90% of the unaffiliated kids said there was no group for them in school, while fewer than 1% said there was a group and that they’ve attended a meeting. 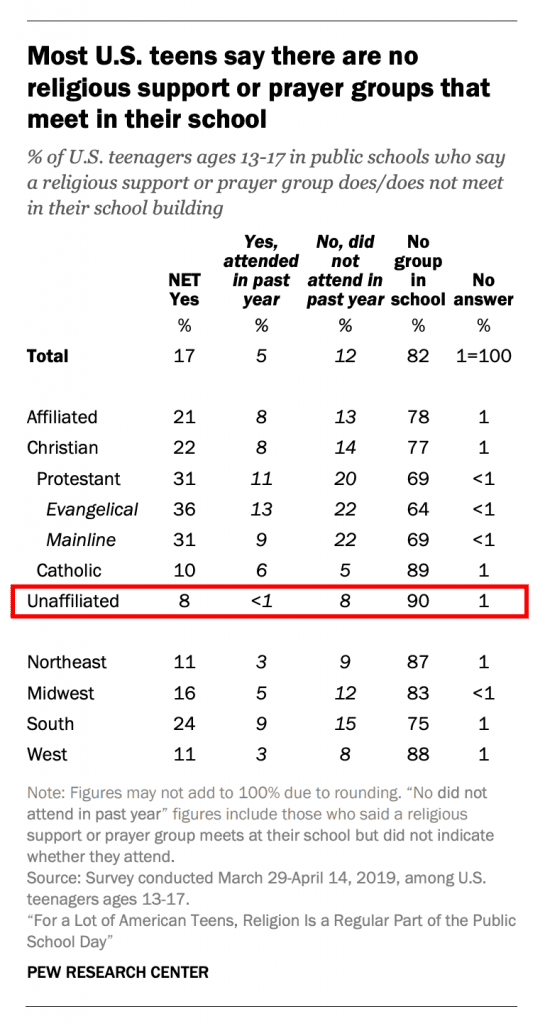 Kevin Bolling, the Executive Director of the Secular Student Alliance, suggested the low number for unaffiliated students may be reflective of the obstacles in their way rather than a lack of interest or awareness.

Non-religious students may not have the freedom or ability to start or be involved in a Secular Student Alliance in their schools. A student would probably have to explain to a parent why they are staying after school to be involved with a club. What if the student fears the parent or family member will not be supportive or get kicked out of the house? A teacher would have to be willing to be an “out atheist” to advise and support the student club — sometimes at the risk of the possibility of jeopardizing their employment. We know of numerous examples of public school administrators who have made it very difficult for a student, who already has familial and teacher support, to have the club officially recognized at the school.

The risks and hurdles for the unaffiliated teens are high, while they are the exact opposite for the religious teens. While the campus organizing staff of the Secular Student Alliance does everything they can to support non-religious teens, I am not surprised, with all that is working against them, that the number of students who have attended a group like SSA in high school is so low. But as a secular community, we can help those students.

That signals a real opportunity for growth, especially in parts of the country where Christianity is baked into the culture.

I made a video discussing some of these results here:

October 3, 2019
A Judge Never Should Have Given Amber Guyger a Bible After Her Murder Sentencing
Next Post

October 3, 2019 Todd Starnes Wasn't Booted from FOX News Because of the "Moloch" Comment
Browse Our Archives
What Are Your Thoughts?leave a comment