Republican Governor Matt Bevin, of Kentucky, a man who constantly promotes Christianity using his office as a platform, is once again supporting the meaningless “Bring Your Bible to School” day sponsored by Focus on the Family.

It’s not the first time he’s done this. This time he did it with a tweet and a video.

� STUDENTS �#BringYourBible to School Day is THIS Thursday, Oct. 3!

The Judeo-Christian principles that are bound in this book are timeless, containing an amazing amount of history, knowledge, wisdom and guidance…

He says in the video that every single young person around the country should bring a Bible to school and “share it.” In other words, he’s pushing for students to evangelize and convert their friends. He also says the Bible influences every decision he makes.

What Bevin doesn’t say is that this day isn’t even necessary. There is no law against kids bringing their Bible to school all the other days. They can always read it. They can always pray. Today’s event is promoted as a way for evangelicals to fight back against Christian persecution, which doesn’t exist here, while simultaneously giving Christians the tools they need to persecute others. No wonder it’s brought to you by the same group known for its opposition to LGBTQ+ rights as well as the rights of other vulnerable groups.

At best, this event is useless. At worst, it’s going to encourage kids to push their religion on others and bully gay people in the name of God. Bevin’s endorsement, with the trappings of the office surrounding him, doesn’t make those problems any better. 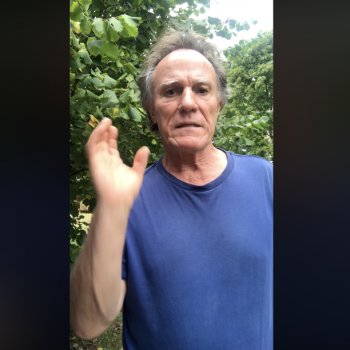 October 3, 2019 Ex-vangelical Frank Schaeffer Delivers Epic Rant Against Christian Right Leaders
Browse Our Archives
What Are Your Thoughts?leave a comment