Seeing Frank Schaeffer vent about the Religious Right is always a treat since you can’t accuse him of not knowing what he’s talking about. Frank and his father Francis are as responsible as anybody for helping create the modern Christian Right. But Frank has long been disillusioned by how white evangelicals have turned their faith into nothing more than an extension of the Republican Party, and that frustration has hit a peak during this administration.

In a new video, he talks about why that cohort of white evangelical leaders will never accept the impeachment of Donald Trump.

… The evangelical white supremacist movement led by Franklin Graham, Jerry Falwell, Jr., Ralph Reed, Robert Jeffress, and others is now opening the door to legitimizing violence against our government and elected officials. Make no mistake. They will not tolerate the loss of the presidency by Donald Trump, either through impeachment or through the election of a Democrat. They will call for violence in veiled and perhaps not veiled terms. They are also laying the groundwork now for saying that since Trump was ordained by God, to work against Trump — in other words, to be a Democrat or a progressive or a brown person or a black person or a Hispanic or an immigrant, or someone demanding and asking for asylum at our borders — is to be working against God.

He then compares those conservative Christians to ISIS in that they’re using their faith to inspire violence rather than peace and democracy. It may seem overly harsh, given the depths of violence exhibited by Islamic radicals, but his point is not that the groups are synonymous but that their tactics rhyme. When you realize what they’re doing to LGBTQ people, to the country, and to the planet — all in the name of their God — it’s hard to give any of them the benefit of the doubt.

Who knew that becoming a former evangelical gave people the power to spit fire like that?

(Portions of this article were published earlier. Thanks to Nico for the link) 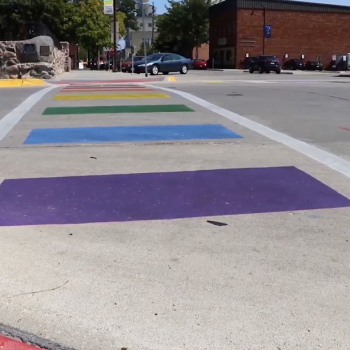