Toronto-area evangelical group Christ’s Forgiveness Ministries (CFM) staged a protest in the city’s Gay Village over the weekend… but the city’s LGBTQ community rose up, and their united voices drowned out the hate of anti-gay preaching.

The original Christian protest included CFM’s founder, David Lynn, who was arrested for disturbing the peace in June after a bout of disruptive street preaching with a megaphone. Lynn has stated that he believes his arrest and subsequent criminal charges prove that Christians are discriminated against in Canadian society. Consequently, the protestors he brought together claimed to be marching in favor of freedom of speech and civil liberties.

But the people of Church and Wellesley also have freedom of speech and civil liberties, and they used them to send a different message: Your rhetoric isn’t welcome in our neighborhood, and we want you to leave.

The evangelical marchers were quickly blocked by counter-protesters, chanting “Our streets, go home!” and blaring upbeat tunes like Cher‘s “Believe” over loudspeakers.

In addition, an official counter-rally took place in a park on the other end of Church Street. Called “Unite For Love,” the rally featured religious and political leaders speaking on themes of acceptance and equality. In addition, more than 70 religious leaders from a range of faiths and denominations — including Christians, Muslims, Jews, and Buddhists — signed a letter in support of the “Unite For Love” message.

Mayor John Tory attended the counter-rally, where he spoke about the importance of opposing anyone who wants to use their free speech to make others feel excluded or unwelcome:

According to their website, Christ’s Forgiveness Ministries hopes to increase their presence with proselytization booths “on every major street corner” so no one can ever really get away from their aggressive messages about sin and salvation.

Kudos to the Toronto community for standing up against that future. 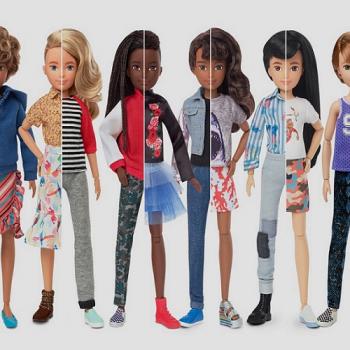