On his website, West Virginia House Delegate Joe Jeffries describes himself as “for the people,” but there’s reason to think he doesn’t mean the state’s LGBTQ people. 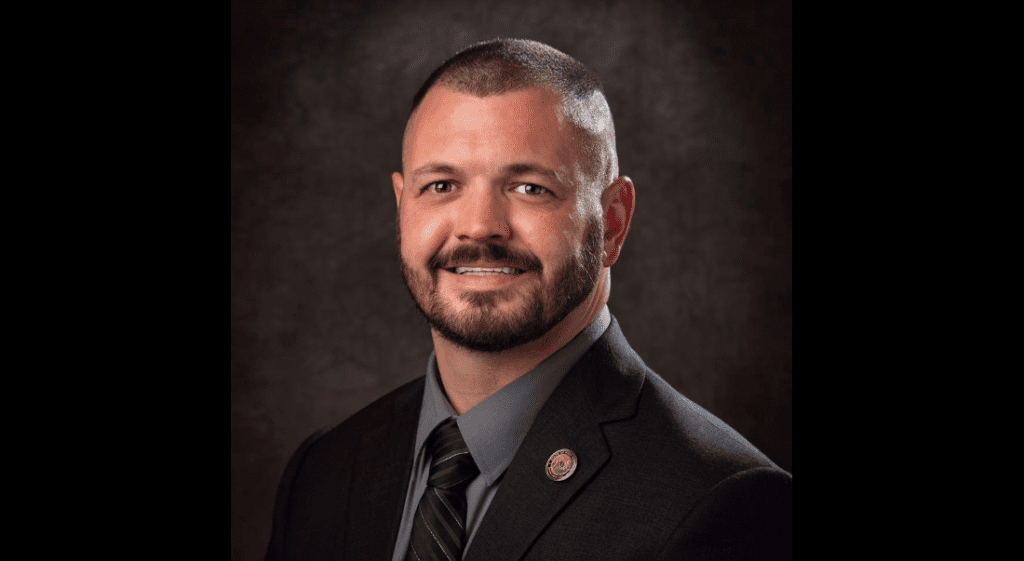 Earlier this week, he took to Facebook to complain about a display created by an unnamed teacher in support of LGBTQ students. Decorated with colorful hearts and a rainbow-printed border against a bright yellow background, the hot-pink lettering reads, “[Shade] never made anybody less gay. Keep calm HHS. Support our LGBTQ.”

My question is, Why is this being pushed on our children to “support” them? Why does HHS believe we should support something against our beliefs? Can anyone show me the pictures in support of Jesus in the school?

He further described the poster as “indoctrination of our children” in a tweet.

When commenters failed to see the problem with students being encouraged to support members of their school community who face discrimination and harassment — something you’d think even conservative Christians could get behind because of that whole “love the sinner” thing — Jeffries doubled down, posting an image of the school’s policy on “Participation in Political Activities.”

Non-school related activities, including political activities, do not contribute to a positive learning climate and may be disruptive, divisive, and distracting. Therefore, such activities are not appropriate within the school setting. It is the intention of the Board to regulate such activities on all board-owned or -used property, within all school buildings, and at all school-sponsored activities.

The policy went on to specify that posters and literature supporting political viewpoints were prohibited on school grounds, and that employees of the school board were not to advance their political views at work during the course of their employment.

But as several of Jeffries’ (over two thousand) commenters pointed out, the existence of LGBTQ students isn’t a political viewpoint; it’s a fact. And if the school wishes to “create an environment that will permit students to grow and develop,” they need to create that environment for all students, not just straight cisgender ones. Treating classmates with respect isn’t political — and the fact that a Republican politician thinks it is tells you far more about him than the school.

Promoting a specific religion, on the other hand, is a reasonable violation of the school’s rules.

Jeffries doesn’t have a good history with the LGBTQ community of West Virginia. In February of this year, Jeffries proposed a bill to block municipalities from passing non-discrimination ordinances offering protection beyond what’s written into state law. Gender identity and sexual orientation are not recognized as protected categories in West Virginia’s human rights legislation, so many cities were hoping to protect LGBTQ people locally. Jeffries didn’t want that, as he explained to the Lincoln Journal:

“Gender identity is a made-up fabrication to provide for a special class that doesn’t otherwise exist. A prime example of how that may be used in a similar reference is that ‘My gun could identify as a notepad and would null and void all gun control measures,’ or, ‘My dog could identify as a cat to avoid paying the dog tax,’” said Jeffries. He described gender Identity as a “clear violation of the rights of citizens,” one that endangers the people of the state by allowing anyone to identify to whatever sex they want. “It’s a myth and is not welcome. Allowing men in the women’s bathroom freely, and vice versa, is not up to government to decide. If a business wants to put in a unisex bathroom, they are welcome to do so,” said Jeffries.

“We discriminate against age in the army, against gun owners saying where they can and can’t carry, against smokers with an additional tax, drinkers, people who drive, etc. Where do we draw the line? How many made up classes must we make?” concluded Jeffries.

The bigotry never ends with this guy. No wonder he’s upset when a public school asks students to treat their classmates with respect.

September 29, 2019 Experts Urge Racism Investigation of Judge Who Cleared "Faith Healing" Parents
Browse Our Archives
What Are Your Thoughts?leave a comment