A Colorado pastor apologized to his congregation, then led them in a “cleansing” prayer, all because an openly gay speaker took the church’s stage during an outside event hosted there the prior week. (And now, I guess, those gay cooties are everywhere.)

Last week, hundreds of non-profit leaders gathered in the city of Del Norte to network and learn more about how to receive money for their organizations as part of an event called “Rural Philanthropy Days.” Speakers included representatives of grant-giving groups as well as state and local officials. The Community Resource Center, which sponsors the event, said that more than 750 grants totaling $22 million were given away in the community between 2009-2015.

The event was held at Gateway Church, one of the largest venues in the city. While this wasn’t a religious event at all, this church could comfortably hold hundreds of people in one place, so it made for an ideal setting.

One of the speakers on the first day of the event was Justin Garoutte, a research associate for the Pacific Institute for Research and Evaluation (PIRE) who is working on a study that focuses on understanding and reducing LGBTQ suicide among adolescents. That would also explain why Garoutte gave a coming out story on stage. The website for the event says this was part of a session designed to highlight local storytellers.

And yet that speech was apparently so disturbing to Pastor Greg Schaffer that, days later, he led the church in prayer specifically undo the damage. A video of his sermon from September 22 was just posted online on Friday. A transcript is below.

(Update: The original sermon video was pulled, so a mirror is shown below)

… when you’re not expecting something and boom. That happened to me this week. We had something here at our church where we opened our doors to Philanthropy Days, if you’re aware, and what a privilege it was to open the church to that which, every four years, basically, a lot of people come for a few people that have a lot of money and try to get grants and figure out how that whole process takes place.

And that was pretty neat, that we have the largest building in Del Norte for people to gather. So picture 300 people here with tables all set up, wall to wall, shoulder to shoulder. And it was good! Except for one part.

There was a, sort of a guest speaker, keynote speaker, that we weren’t aware of — actually two — that came in, that shared some things that we’re not in line with as a church. Now I believe big in opening the doors and being open to the community, but if there’s a message that’s portrayed or projected from this stage that does not agree with who we are as a people, then we need to say that. We need to make that clear.

And so we had two gentlemen actually connected with the LGBTQ community and the advancement of that whole deal. You know what I mean. I’ll save you the details.

Bottom line is: Hank and I were up in the sound room. I think it was Tuesday. And we were really caught off guard. Not expecting. And just so you know, the people that set up Philanthropy Days here, locally, had no clue that this was happening.

So, you ever get in a moment where you’re like, “Okay, this isn’t happening right now, where this guy’s getting up and saying ‘I’ve embraced my homosexuality, and I’ve given up on God and God can’t help me. He’s a hindrance and a person that makes me feel guilty, and so did the priest, and so I walked away,” and everybody said “Yay! Hey! All right!” Everybody claps. And here are Hank and I, like a biblical moment, what are we going to do in this moment?

And so it’s like this, church: What Jesus in that moment of surprise do we want to be? The one that turned the tables over in the temple and said “My house is a house of prayer”? Or is it the one that hung on the cross and said, “Father, forgive them, for they know not what they do”?

And can I tell you, after a week of staying up at night and lamenting, if you will, I say I still don’t know that answer, exactly what Jesus would have done in that moment, but I know what He would want me to share right here. That’s a hot topic, if you’re not aware. The LGBT movement — Q, X, Y, all the extras, the letters that are getting put on — there’s a push out there that’s going into our school systems. It’s coming into our churches, into our communities, and more than that, into our families.

We’re called, church, to love but to bring the truth at the same time.

Now let me say, I — We don’t endorse homosexuality in this church. We don’t. We believe it’s a sin. Trust me, you know, that’s a wrestling match for me firsthand. But there’s a reason why things happen, and I believe God brings opportunity to the church as we open our doors, we can’t fool ourselves what’s out there. Sometimes it comes in.

And there might be someone here this morning that says, “You know what? What you’re saying, I totally disagree with it, and it’s insensitive, and I’m never coming back.” But I pray that’s not the case. I pray, as Christians, that we have this passion to love those that know God and love those that do not know God. The way Jesus would. Let me just end with this, and then if you got questions, you can ask me afterwards, it’s fine.

When Jesus got really righteously ticked off, you know when he did? It was when the religious people were hypocritical in their love towards others. It’s when they put laws and rules and regulations on people. That’s when Jesus got upset. When Jesus embraced sinners, He did just that, He embraced them, because he loved them. Now I want us to do the same thing. I want us to be the same way if that’s okay.

So, since we’re praying together a lot this morning, I’m going to ask that you bow your heads with me and we just do a one-prayer cleansing of this sanctuary. This is God’s place. This is a holy place. At the same time, it’s a building, right? We are the church. Reminds you of this as well: God’s a big God, isn’t He? If somebody says something bad about God, guess what? He can take it, because we saw that on the cross. When insults were hurled at him, He did not insult in return, right? And church, more than anything else, I want to pray this this morning: We need to be unified, not separated, not divided. Not saying this or that in judgment, but to say we need to be one voice. Clearly, a clarion call to the world that we live in who Jesus truly is, amen?

Lord, may we look at ourselves this morning as well as we prepare for the message that you would speak to our hearts. Lord, that there would not be a log in our eye while we look at our brother speck in his. God, we wrestle with such a difficult polarized, political, all those things, subject matter. Lord, when that all is stripped away, we know this: You’ve called us to be light. Your gospel is good news. And as we see that John the Baptist’s message was one of repentance, we pray that that, as well, would be in our hearts, that you called all of us to turn from our sin, and to walk away from our sin, and to embrace You in the fullness of who You are.

Bless this building, God. May your peace rest here and reign here. May your presence be tangible. Lord, may the enemy have no stronghold in this building, or in our hearts and our minds. Lord, let this church be a blessing to the community and may it reach far beyond that.

We pray that in Jesus’ name. We say together Amen. By the way, you gets my apologies, also, for letting that happen. It’s tough to know when you don’t know, but still my responsibility, so I just want to say that.

When Garoutte spoke, he wasn’t doing it on behalf of the church. It’s absurd that this pastor felt the need to apologize for someone else’s apparently emotional story about coming out. People like Schaffer are the reason people like Garoutte tell these stories in the first place.

I reached out to both the event’s organizer and Garoutte for responses, but neither responded as of this writing.

***Update*** (9/29): Justin Garoutte confirmed all this in an email this afternoon. He added this note:

An additional aspect that you should know, during my keynote, Pastor Greg cut my mic and exclaimed from the sound booth that I needed to watch what I say. My understanding is that behind the scenes, event organizers and the final speaker… were communicating with Pastor Greg to allow me to continue my speech. My mic was eventually turned on, albeit at what seemed like a much lower volume. I was informed of Pastor Greg’s actions via a phone call on the afternoon of the event by Kim Smoyer, coordinator of the event. Despite all of this, the hundreds of folks in attendance gave me a standing ovation.

Professionally and privately, I work to build health equity for LGBTQ youth throughout the region, and I know firsthand how homophobic remarks like Pastor Greg’s increase the fear and negative health outcomes (i.e., increased risk of depression, anxiety, suicidality, substance use, among others) through minority stress for our LGBTQ family. That is why SLV Pride and the inaugural Pride Day and March this year in Alamosa were so important!

September 29, 2019
Another Robert Jeffress Lie: Church/State Separation Isn't in the Constitution
Next Post 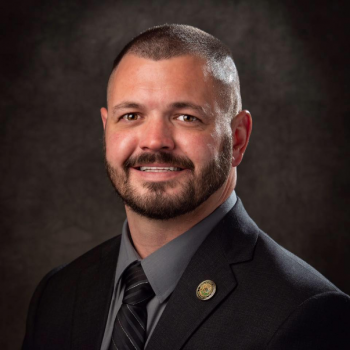 September 29, 2019 WV GOP Lawmaker Complains About School Display Urging Respect for LGBTQ Students
Browse Our Archives
What Are Your Thoughts?leave a comment