FOX News Panel: Liberals Are “Worshipping the Environment” Instead of God

Members of a FOX News panel discussing climate change — mocking it, of course — claimed that environmentalists have “forgotten about God” and are “worshiping the environment instead.”

Which is their way of saying God will fix everything, so no need for us to do anything.

The Outnumbered panel was picking on 16-year-old activist Greta Thunberg when conservative pundit Buck Sexton decided to tie environmentalism — climate change, specifically — to a religion. He was backed up by his co-host.

“Climate change is a religious belief for people who think they’re too smart for religion,” Sexton said.

“They’ve got Catholic guilt and they’re going to confession,” Francis responded. “But they just have forgotten about God, so they’re worshipping the environment instead,” she added.

No. Just no. Climate change isn’t religion. There’s a key difference between the two: Only one is supported by the evidence. We understand the threat of climate change based on the scientific consensus, which is based on mountains of data. Religion is wishful thinking that relies on hope and tradition.

It’s ironic, actually, that Sexton would use religion to insult climate change. If he believes we’re treating it as a religion, that’s a good thing, right?

Francis took the comparison even further.

“You see it in kids with school,” Francis said. “One of my kids, their class said that their motto was ‘Treat myself well, treat my friends well, respect the environment.’ And I was like, that’s ‘Love your neighbor as yourself and God above all things.’ It’s the same thing, you just replace who’s in there.”

Those are not the same thing, though if Francis feels that way, that’s all the more reason for her to defend the climate activists. They just want to follow the biblical message, right? .

Sexton didn’t accept any of that. He couldn’t get over Thunberg’s age:

Sexton then added that the biggest weakness for advocates of climate change awareness is the spokespeople, including Thunberg, who testified before Congress Tuesday and urged lawmakers to “listen to scientists.”

“The biggest weakness this stuff always has is the spokespersons for this movement,” Sexton said. “They also have this young girl who is, what, 16? We gonna ask her about the Fed rate next?“

Thunberg understands climate change and the threat it poses more than FOX News hosts ever will. (Give her a textbook and some time, and she’d know more about the fed rate, too.)

Calling environmentalism a false religion is a weak argument, and it’s the only one they have. Other Christians would tell you they believe God created the universe and that’s why it’s our responsibility to take care of it. As for atheists, we know we’re lucky to live on this planet and there’s no other option available to us. We have to do our part for the planet because no one else is going to step in from above.

September 22, 2019
There's a New Case of a Rabbi Sucking on a Newborn's Penis and Giving Him Herpes
Next Post 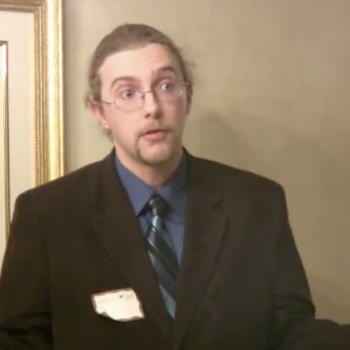