Mark Taylor: Concealed Weapons Can Keep the Red Cross from Sacrificing You to Baal

“Firefighter prophet” Mark Taylor, the subject of the Liberty University-connected film The Trump Prophecy, is encouraging people to acquire a concealed weapons permit to protect themselves from being kidnapped and sacrificed to high-level demon Baal — allegedly a “very violent entity” who “feeds off the blood of the innocent.”

Taylor has been in the news before, garnering publicity for his many (increasingly unhinged) public prophecies about Satanism in America — for instance, saying that Hillary Clinton would have turned churches into Satanic temples, or that the devil uses chemtrails to keep people away from God.

This time, Taylor appeared on Up Front in the Prophetic, a Christian program hosted by Allen and Francine Fosdick, to explain that these human blood sacrifices are being offered by, among other organizations, the Red Cross… and with voluntary blood donations running low, they’re turning to human trafficking to pick up the slack.

“We all know the Red Cross is corrupt,” he said. “They’re into all of this.”

To the Fosdicks’ astonishment, Taylor went on to predict that the Red Cross would launch a massive blood drive “for no reason” — as if there’s ever a time when medical transfusions aren’t necessary to save lives. Taylor and the Fosdicks may not be sure exactly how blood banks will use the blood they’re collecting, but they’re pretty confident it will be used for “drinking” or “whatever it is they do.”

Why let modern medicine get in the way of a good horror story?

Luckily Taylor, who describes himself as “a heavy-duty Second Amendment guy,” has just the solution for concerned citizens who would prefer not to be kidnapped by human traffickers wanting to use their blood in demonic rituals:

I tell people, I don’t care if you’re Christian or not, if you don’t have a concealed weapons permit, you need to get one. You need to learn how to use a weapon and you need to be carrying it right now, because this is a very dangerous time that we’re entering into.

You have to hand it to him; of all the arguments in favor of gun rights, that one’s definitely the most creative. 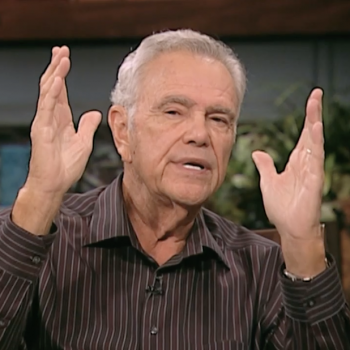