Back in July, the commissioners in Hamilton County, Texas were considering installing a stand-alone Ten Commandments monument outside the local courthouse, courtesy of a request from local resident Johnny Clepper, despite a very clear Supreme Court ruling calling that an illegal promotion of Christianity.

Had they allowed it, you can bet atheists and Satanists and other groups would have demanded their own spots outside the building, since it would become an open forum for outside voices. There’s no way people would quietly allow a Christian monument to go unchallenged.

… after a long summer of discussion, Clepper withdrew his request.

”I just didn’t want to divide the community, and I thought withdrawing would be better than having friction among your neighbors and friends,” said Clepper.

Right. The guy who thinks anyone who worships false idols should burn in Hell for eternity is now worried about causing divisiveness…

Even he’s not buying his own BS, given that he still plans to install the monument near the local police department… but on private property.

… Clepper plans to put his monument on private property right next to the Hamilton County Sheriff’s Department.

He said he expects to have his monument up in three to six months, complete with lighting and an American flag.

How is that any less divisive…?

At least it appears to be legal. That’s what matters most here. Maybe next time, the local lawmakers will listen to critics from the beginning so stories like these don’t drag on for months. 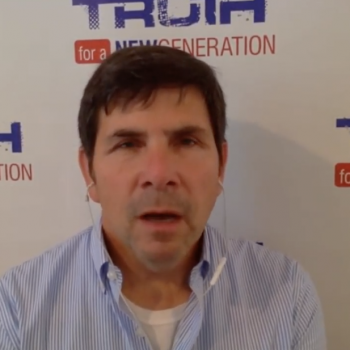