One thing I always appreciate about Christian football coaches at public high schools is that they think they’re so invincible that they openly brag about their own illegal actions.

That’s why Chad Diehl, the football team’s “character coach” at Springfield High School in Tennessee, posted images of himself baptizing players on the football field. It’s a clear violation of a pastor using his position as a coach to promote religion to public school athletes. (The image was later retweeted by Head Coach Dustin Wilson.)

What a blessing it was to baptize these young men @MikieNeal, @haley today in front of their football brothers. #sptbrand, #kingdombuilding, #family, #linkup pic.twitter.com/4WVJ4FlJwQ

The Freedom From Religion Foundation sent a letter to the Robertson County Schools recently urging them to put a stop to this:

“It is inappropriate for a public school district to proselytize students by praying with students, baptizing students, or employing an outside religious leader to organize these activities,” writes FFRF Staff Attorney Chris Line. “This is especially problematic in the context of athletics, given the coercive pressure players feel to conform to coaches’ expectations so as not to disappoint coaches or hurt their standing on the team.”

FFRF explained, correctly, that even if this event was voluntary and not during practice, there’s still coercion involved. When a coach urges kids to get baptized, there’s pressure to do it or at least support it, lest you get on the coaches’ bad side (and lose playing time and possible opportunities). Also, why does this team have a pastor working as a “character coach”? Why does a pastor even have access to these students? This isn’t church.

And yet, according to the Nashville Tennessean, the district has responded to FFRF by shrugging their shoulders and ignoring the complaints.

The district has reviewed the incident and determined that neither the school nor school personnel have violated any policies or laws in this matter, according to a statement Robertson County Schools released Wednesday afternoon.

“Specifically, the activities … were student initiated, student led, and occurred after the practice session had ended, and after school hours,” the statement reads. “All participation was voluntary with no requirement for attendance either stated or implied.”

The district really needs to find a better attorney.

When coaches are involved, it’s hardly “student-led.” When the school’s football field is used for the baptisms, there’s a clear implication the school is okay with this. The response also ignores the coercion factor.

And then, as if to reiterate how ignorant these people are, Robertson County Director of Schools Chris Causey said that no one’s complained to school officials about the baptisms, so why is everyone making a big deal about it?

“We have not received a single phone call from anyone asking us about (these baptisms). Zero,” the director said. “If we have concerned parents or community members, I would think they would need to contact the district office about it instead of turning to organizations that aren’t even based in Tennessee.”

Why would anyone complain to the district when people like Causey make it clear that religion overrides the rules? Why put yourself or your kids in that position? Better to alert a national organization that focuses on these issues than out yourself in a Christian-dominated community. The fact that FFRF is based in Wisconsin is irrelevant. (Conservative Christians never seem to care where right-wing legal groups are based…)

If the district doesn’t take action, then a lawsuit could be in the works. That would require a plaintiff willing to go public, though, which is a hard sell. Still, a better school district would take action on its own, not make up its own rules to accommodate illegal Christian proselytizing. The students there deserve far better than the leaders they have.

September 12, 2019
Catholic Priest Who Sexually Abused Kids Gets “Home Detention” For One Year
Next Post 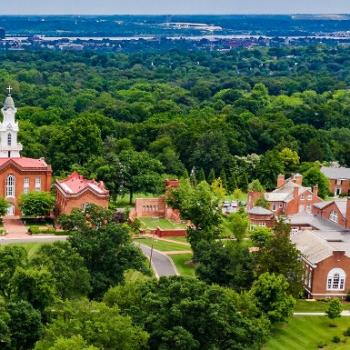 September 12, 2019 Episcopal Seminary Built By Slaves Will Set Aside $1.7 Million for Reparations
Browse Our Archives
What Are Your Thoughts?leave a comment