TN Republican: To Save America, We Must “Get Rid” of “Higher Education” September 10, 2019 Hemant Mehta

TN Republican: To Save America, We Must “Get Rid” of “Higher Education”

Tennessee State Sen. Kerry Roberts, a safe-seat Republican who can’t tell the difference between the Bible and the Constitution, says we should eliminate higher education — just get rid of the whole damn thing — because it’s a “breeding ground” for liberals.

Apparently, getting a formal education and interacting with different kinds of people really makes people think twice before voting for Republicans… and he’d like to do whatever he can to keep people ignorant. It’s good for his political future.

Roberts made the statement on his radio show last week, but it was just picked up yesterday by the website TN Holler. It didn’t even come in response to a bill involving education. Roberts was ranting against Cherisse Scott, an abortion rights advocate, who had chastised GOP lawmakers for pushing anti-abortion policies without doing all the things that make abortions more avoidable. Republicans, she said, weren’t supporting health care access, raising the minimum wage, or helping with public education.

That set Roberts off. You can hear it in the first video around the 50:30 mark:

… If there’s one thing that we can do to save America today, it is to get rid of our institutions of higher education right now, and cut the liberal breeding ground off! Good grief! The stupid stuff that our kids are being taught is absolutely ridiculous, and this is a woman who’s a product of higher education. She’s learned all of this stuff that flies in the face of what we stand for as a country!

And here we are as legislators paying for this garbage to be taught to our children, and we’re not doing anything about it. And all these red states across America, we let it exist, and it’s absolutely unbelievable. And this is the price that we pay: the murder of over half a million innocent lives every year, with people sitting there, justifying it to their last breath.

The problem isn’t that college promotes social justice or liberal indoctrination, as he claims. It’s that people who have more information at their disposal are well aware that the way to decrease abortions is to make it easier to prevent pregnancies before people are ready for them and give them the ability to pay for the kids they want to have.

The GOP ignores the root causes of abortions; their actions only make unsafe abortions more likely, whereas Democratic policies do more to prevent abortions entirely. Scott knew that. She said that. Republicans couldn’t handle it. And now this guy wants to make everyone else as ignorant as his Republican colleagues.

Imagine being a legislator and having a magic wand that would allow you to do anything. You might wish for universal health care. Maybe you’d eliminate assault weapons. This guy? He wants to get rid of education.

Screw the nurses, and researchers, and nuclear scientists, and attorneys. Nope. No specialized education for you. It’s all worthless, because people with advanced degrees often disagree with GOP Bible-thumpers.

If that’s not Republicanism in a nutshell, I don’t know what is.

By the way, Roberts is now doing damage control pretending he was just joking. It’s called hyperbole, everyone! (No, seriously, that’s his excuse.)

Today’s word is hyperbole. A week ago, I went on a rant on The Kerry Roberts Show calling out higher education as a liberal breeding ground and calling for it’s elimination. My listeners clearly understood the humor and hyperbole of it…

Right. Because if there’s one thing conservatives are great at, it’s being funny…

For what it’s worth, Roberts voted for a $38.5 million budget earlier this year that included money for higher education. So if he’s not joking, he’s definitely a hypocrite. 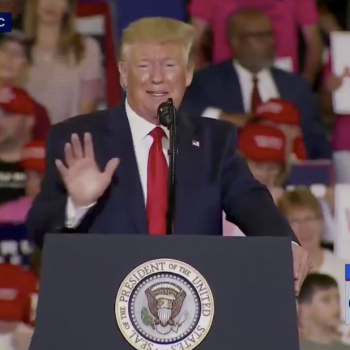