Mayor Pete Buttigieg and Sen. Cory Booker, more than the other Democrats, have been talking about their personal faith ever since stepping onto the campaign trail. It’s been a refreshing change of pace for people who are only used to Republicans talking about Christianity and only as a weapon against various groups.

While it’s not personally appealing, it’s not as bad as it could be because they always make it clear that they support church/state separation and they have no desire to push their faith onto everyone else. In the process, if it helps some moderate voters realize Democrats aren’t anti-religion (as if that’s a bad thing), it’s good for all of us who support progressive policies.

It hasn’t always worked. I criticized Buttigieg in June when he suggested Democrats avoided God-talk. That’s not true at all — President Obama, for one, constantly brought up his faith while in office, and it didn’t shake the perception of Democrats avoiding religion. But on Thursday night, Buttigieg offered a slightly revised version of that response and I thought it sounded much better.

This is what Buttigieg said after Stephen Colbert asked him about the proper role of faith as a politician:

Well, I think Democrats have been a little allergic to talking about faith, and it’s largely for a very good reason, which is that we passionately believe that when you’re running for office, or when you’re in office, you have an obligation to treat people of any religion and people of no religion equally. It’s a basic American principle.

But at the same time, as we see some of these figures on the Religious Right embrace behavior — and, I think, policies — but definitely behavior that flies in the face, not just of my values but of their own, then it reminds me of all of the parts of scripture where there’s a lot about hypocrisy. And I think we have an obligation to call that out — and to speak about how, you know, not just the Christian faith tradition that I belong to, but pretty much any religious or non-religious moral tradition I’ve ever heard of, tells us that it’s really important how we treat the least among us, the most vulnerable, the marginalized, that we are obliged to serve the poor, and heal the sick, and clothe the naked, and welcome the stranger. Stranger, by the way, being another word for immigrant. And what we’re seeing right now the White House is the opposite.

He doesn’t pretend his faith is the only source of morality. He focuses on the GOP’s constant religious hypocrisy. He talks about non-religious Americans in a positive way. He doesn’t hide from his own faith, but he doesn’t talk about it in a way that would rub non-Christians the wrong way. He talks about the shared morality of just about all decent human beings. That’s how every religious politician should speak about God if asked.

Again, his response isn’t all that different from what he said during the last debate, but I appreciated the explicit reference to “non-religious moral tradition” and how he elaborated on the hypocrisy of the Religious Right in a way he couldn’t do with the time constraints of a televised debate.

Republicans will always accuse Democrats of hating God. Buttigieg, especially, is showing how he can be religious while still supporting progressive values. The only people who could be offended are hard-line conservatives who believe a right-wing interpretation of the Bible always supersedes the Constitution.

September 7, 2019
Please Support the Work I Do Through This Site
Next Post 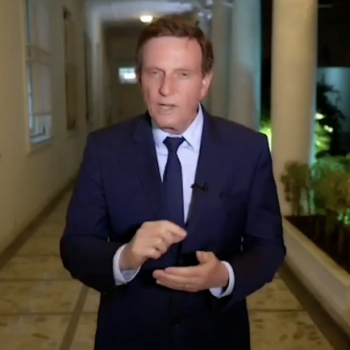 September 8, 2019 Brazilian Mayor's Attempt to Ban Comic With Gay Characters Fails Spectacularly
Browse Our Archives
What Are Your Thoughts?leave a comment