Earlier today, Marianne Williamson deleted one misguided tweet, then posted other ones echoing the same sentiment. All of them reveal why she has no business running for president. 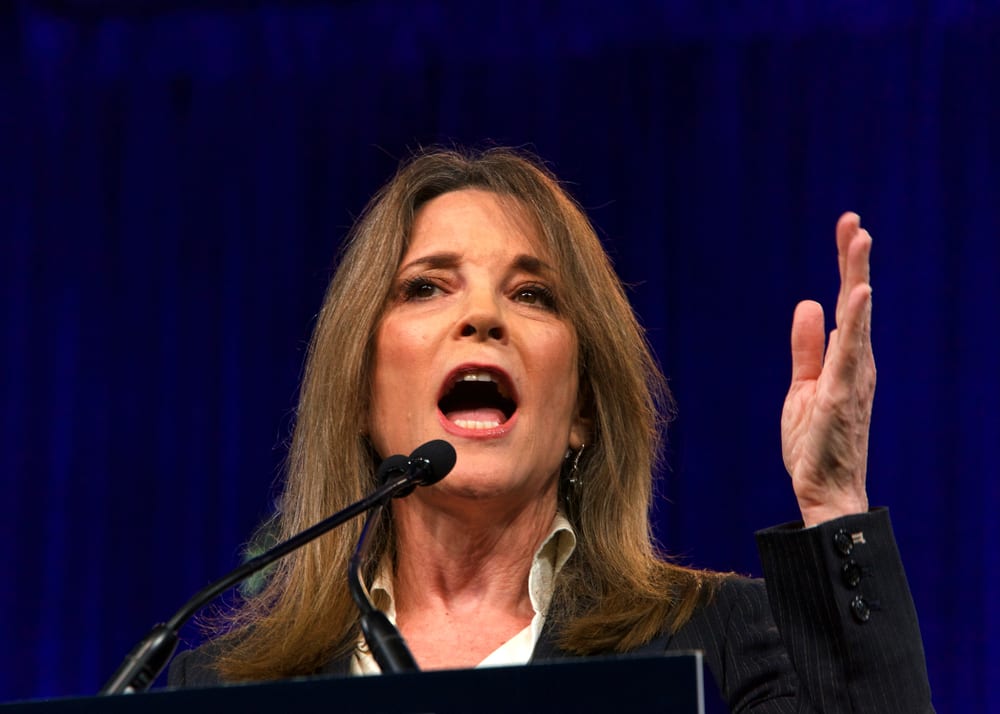 The first tweet suggested that the “power of the mind” could push away Hurricane Dorian. 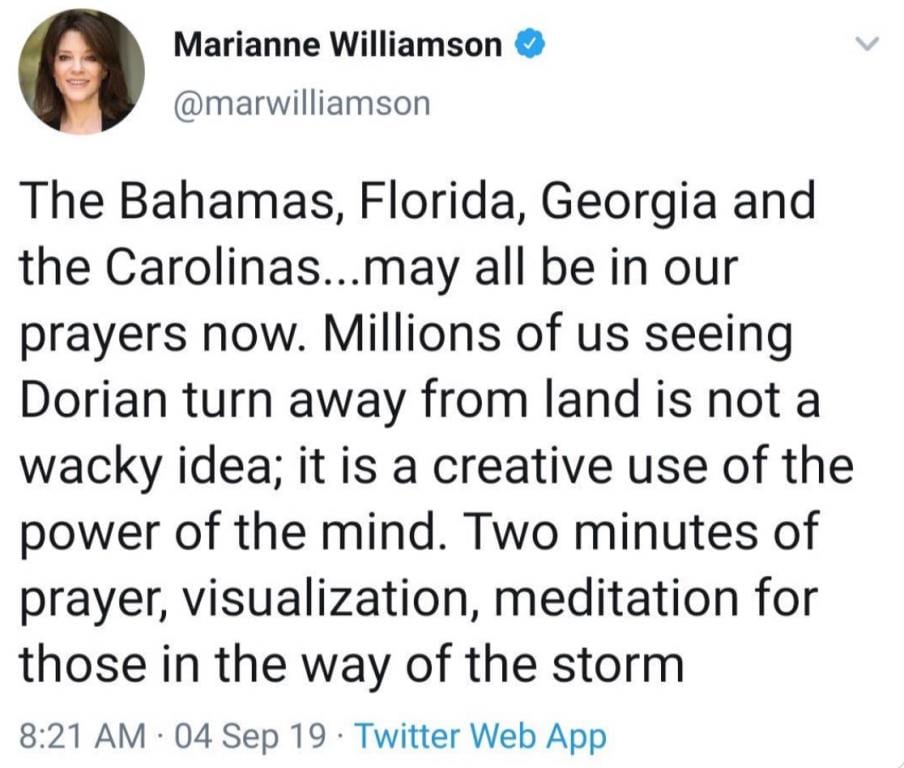 The Bahamas, Florida, Georgia and the Carolinas…may all be in our prayers now. Millions of us seeing Dorian turn away from land is not a wacky idea; it is a creative use of the power of the mind. Two minutes of prayer, visualization, meditation for those in the way of the storm

The irony is that, just hours earlier, she tweeted a sensible message about how public policy needed to center around the core principle of “what would most help people thrive?”

She asked the right question, only to settle on the dumbest possible answer.

Not surprisingly, she got plenty of backlash for her idiotic tweet. Then, doing her best impression of Donald Trump, she blasted her critics for using her own words against her.

She’s wrongly assuming everyone’s slamming her for suggesting prayer could help people in a time of need — when the truth is everyone’s criticizing her suggestion that thoughts alone can literally change the path of a hurricane. (We’re right. She’s wrong. This isn’t complicated.)

Prayer can help you cope. Prayer might change how you react in a given situation. Much like meditation, it can have a calming effect. It can get you through a rough time if you believe some God is listening to you. It has value for those who are believers. It’s one hell of a placebo.

I can admit all that while still (honestly) saying prayers won’t change the situation. Prayers won’t improve your test scores, or the outcome of a big game you’re watching, or the impact of a disaster. Your silent thoughts have no power beyond your own mind.

When people criticize Republicans who offer “thoughts and prayers” after a mass shooting, they’re not trashing people who pray for their own comfort. They’re criticizing the way it deflects from actual solutions. They’re criticizing politicians who only ever offer thoughts or prayers with nothing tangible to back them up.

Williamson’s problem is that she thinks supernatural solutions will fix problems that require reasonable policies. The problem isn’t the “overly secularized Left,” whatever that means. (Oh no! Too much reason!) Cory Booker and Pete Buttigieg bring up their faith on the campaign trail all the time and they get relatively little pushback from atheists and progressives due to that. That’s because they don’t pretend like their faith is a solution to the problems facing our nation. They’re not suggesting their faith should take precedence over sound science. They use their faith as a guide, or as inspiration, or as a tool to rally other like-minded people behind their actual policy proposals.

They sure as hell aren’t calling for people to woo the hurricane away with their minds.

There are plenty of Democrats who pray. It’s not the place of a politician to mock them for it. But it’s absolutely the place for Democratic voters to condemn politicians who think religion or whatever-the-hell-Williamson-is-selling is going to fix the mess we’re in.

It was obvious Williamson was never a serious candidate. But insulting the voters she needs to win the primary, over a mistake that she created for herself, is just a rookie mistake. There are far better candidates than her in the Democratic primary.

Thoughtful people shouldn’t waste their time or their votes on her.

September 4, 2019
Disgraced Catholic Leader Finally Speaks Up but Shows No Remorse
Next Post