Elected officials in Carroll County, Maryland announced a settlement yesterday in a lawsuit involving religious invocations. By doing so, they made it clear they knew they were on the wrong side of this issue.

The lawsuit was actually filed in 2013 by two plaintiffs, one of whom was Bruce A. Hake, a Roman Catholic. They said the Carroll County Board of Commissioners regularly opened meetings with Christian prayers. The public didn’t deliver them; the Board members did. And they were far from inclusive:

Take that, Jews. And Muslims. And atheists. And Roman Catholics who don’t like their local government promoting a religion.

The American Humanist Association had tried to warn the County against these invocations for more than a year, but they were left with no choice but to sue. At one point, when a pastor emailed the Commissioners lending his support, a Board Member wrote back and said, “It is important for elected officials to hear from and receive support from Christian Conservatives.”

In 2014, a judge ruled in favor of the plaintiffs. The prayers had to stop.

And then the very next day, the Commissioners responded… with a prayer. Commissioner Robin Bartlett Frazier, who prefaced her remarks by saying she would risk jail time to defend the prayers and that letting the decision stand was tantamount to promoting Communism, began to quote a prayer by George Washington, full of references to Jesus and the Holy Spirit… as if quoting the first president was a loophole allowing the Board to pray without actually praying.

So the American Humanist Association sprang into action yet again, telling the Board’s lawyer that they might file a charge of contempt if the Board didn’t obey the ruling.

The Board didn’t listen. They kept praying. So the AHA filed those contempt charges. Not only that — the AHA asked the Court to fine the County $30,000 for violating the ruling and they wanted an additional $10,000 for each additional violation moving forward.

If the Board wanted to keep praying, it would cost them.

A month later, the Supreme Court decided Greece v. Galloway, saying that sectarian invocations were legal… as long as everyone had the ability to speak. Having only Christian prayers at government meetings was still forbidden, though, so the AHA asked a judge to step in once again.

It’s been a while since there’s been any movement on this, in large part because everyone was waiting to see how an appellate court would rule in a similar case. (The Fourth Circuit finally said last year it was unconstitutional to have only Christian prayers at government meetings.) When you consider that decision, along with the fact that the Board of Commissioners today is completely different from the one that made all those bad decisions, it’s clear why they voted unanimously yesterday to just settle this case. Even they knew this was a losing proposition for them.

The AHA will be awarded $125,000 in legal fees. The Commission knew that, if they kept fighting, those costs would only go up… and they would lose.

If Carroll County moved forward in U.S. District Court and lost, Burke said the board would likely owe approximately $255,000 to the American Humanist Association for attorney fees.

Although the commissioners said they believe in the right to prayer, they concluded that it would not be worth the financial risk to move forward.

“The odds are not in our favor,” Commissioner Dennis Frazier, R-District 3, said in the meeting.

“This is a major gamble of taxpayers’ dollars,” Commissioner Richard Weaver, R-District 2, said.

The Commission now begins meetings with a moment of silence.

For his role as a Plaintiff, along with Hake, Neil Ridgely was given a shiny one-dollar bill.

A perfect response from a guy who knew he was right on this issue several years ago.

There were plenty of Christians at the meeting complaining about the decision to settle the case — including Robin Frazier, who is currently not in jail because that’s not how invocation lawsuits work — but all of them are ignorant about the law and oblivious to the concerns of people who don’t share their religious beliefs. Their uninformed opinions didn’t matter, and the Board was right to hear them out, then completely ignore their desires.

The settlement still needs to be signed by a judge but that’s a formality at this point. After several years, this case is finally over. The preachiest Christians lost. If the Board would have listened to the church/state separation crowd from the beginning. the county would be $125,000 richer. 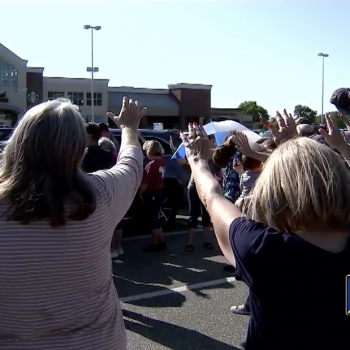