Stop me if you’ve heard this before: Jerry Falwell, Jr. A young man. A “special” friendship in which one of the most prominent conservative Christians in the country makes business deals benefitting the young man — deals that make no sense on paper. And then complete denial whenever anyone insinuates anything even slightly illicit.

Unlike the last time, though, there are no potentially scandalous photos of Falwell and his wife. Thankfully, there’s no Tom Arnold involvement either.

This is the personal trainer:

Sometimes you have to take it easy and let someone else do all the work. Since @jlfjr62 quickly becoming an American sensation with his right hand man @realdonaldtrump , we have to stay looking good for the camera

Why would Falwell want to make a land deal with 23-year-old Benjamin Crosswhite?

Why would the recently Liberty graduate need or want an 18-acre sports/fitness facility?

Why did Falwell use Liberty to facilitate this transaction instead of using his own money (as he did with the Pool Boy)?

Why didn’t Crosswhite have to put up a single dime to get this valuable property?

And what do the rest of us have to do to get a deal like that?

A Liberty spokesperson said there was a perfectly normal explanation for all this:

Liberty had received the athletic center as a gift in 2011 from a trustee who has since died, but it quickly became a “drain on university resources,” the statement said. Crosswhite had been leasing gym space at the property since 2013, and was thus “the most viable purchaser.” Liberty said it adjusted the price and financed Crosswhite’s purchase because its tennis team would continue to use the courts.

If you want actual numbers, the center would have cost $1.2 million but Liberty sold it to Crosswhite for $580,000. Then they loaned him all that money at a generous interest rate while receiving none of the money up front. (Good luck buying a house that way, much less a giant sports complex.) Then, in 2017, they give him another $75,000 loan to help with repairs and maintenance.

That’s the sort of deal no responsible company would ever agree to. And that’s why this deal is raising red flags, given the clear conflict of interest between Falwell and Crosswhite. If Falwell just wanted to do a favor for his special buddy — for whatever reason — then it’s especially odd that he used Liberty’s money to do it. A more responsible organization would have taken offers for that property and settled on the best one.

Then there’s the private jet.

The Falwells brought the trainer along on Liberty’s private jet during a 2012 trip to Miami. Later, Falwell sent an email directing Liberty to lease its gym space to Crosswhite’s fitness business, which began a five year lease in 2013. The cost, according to a lease document: $2,300 per month.

Falwell’s innocent explanation? He was flying to Miami for a physical and he wanted Crosswhite to tell the doctors about his “diet and exercise program.”

Apparently, these people have never heard of Skype or FaceTime or a telephone. Why send a text message when you can just bring the trainer in person?!

Oh, and by the way, that visit to Miami occurred around the same time that Falwell first met Giancarlo Granda, a.k.a. the Pool Boy.

Reuters adds that Crosswhite was given a multi-million dollar line of credit from a local bank last year, based on what the facility would be worth once he builds a pool inside… which he plans to do.

So when it comes to young men and a pool, Falwell is two for two!

Falwell also says Crosswhite helped him shed 75 pounds. It’s unclear what exercises they were doing to burn all those calories. 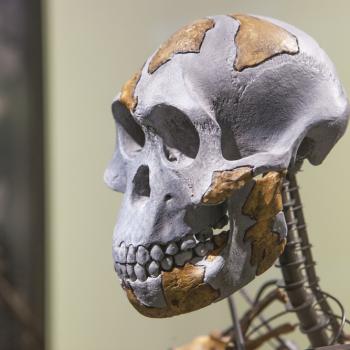 August 27, 2019
Creationist Warns Against "Lucy" Weeks in School. (They Don't Exist.)
Next Post