Yesterday, the Ninth Circuit Court of Appeals ruled that an Arizona town discriminated against people who didn’t belong to the Fundamentalist Church of Latter-Day Saints, affirming the rulings of a jury and judge from 2016.

The case involved the cities of Hildale, Utah and Colorado City, Arizona. They’re mostly populated by members of the FLDS cult, but there are also citizens who don’t belong to the radical Mormon sect. Since we don’t live in a theocracy, you’d expect city officials to treat everyone the same way.

Officials took orders from the church about whom to appoint to government jobs. Police ignored illegal marriages between adult men and minor girls, and lied to protect the sect’s leader Warren Jeffs when he was a fugitive from charges that he raped one of his 24 underage brides.

A non-member testified that she was denied a water connection, forcing her to carry water to her home and sewage away from it for six years. When a man left the church, police ignored hundreds of complaints of vandalism on his property, the AP reported.

In short, non-FLDS members were treated as scum by the people legally obligated to serve and protect them. A federal jury said in 2016 that this was clearly religious discrimination. A judge eventually awarded six residents a total of $2.2 million in damages.

Then came the appeal from Colorado City. (Hildale chose not to appeal.) The city’s lawyers argued that no laws were broken because it’s not like they had an official policy linking the city to the FLDS. Somehow, that argument didn’t win anyone over. Yesterday, the Ninth Circuit said the earlier decisions were correct:

“We conclude that because of the overwhelming evidence that Colorado City deprived non-FLDS residents of their constitutional rights, it is more probable than not that the court would have reached the same verdict on the United States’ [Violent Crime Control and Law Enforcement Act] claim,” wrote U.S. Circuit Judge Milan Smith Jr., in a 21-page opinion.

It’s the right decision. No government should be doing favors for one religious group or picking leaders from it. Everyone deserves to live in a city where their beliefs don’t hinder their civil rights. 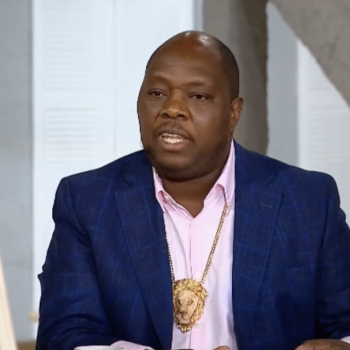 August 28, 2019
Trump-Loving Pastor: "The Bible is the Constitution of the Government"
Next Post

August 29, 2019 Atheist Resigns from VA Women's Council After Controversial Old Tweets Resurface
Browse Our Archives
What Are Your Thoughts?leave a comment