A Preacher Spoke in Tongues… Then His Wife Translated It to English August 22, 2019 Hemant Mehta

Nebraska Pastor Hank Kunneman of One Voice Ministries, who last year promised God would cure cancer in the wake of the Tree of Life synagogue shooting, joined his wife Brenda on The Jim Bakker Show today, and things got weird when he began speaking in tongues.

The practice is odd enough as is, but what was unusual was hearing Brenda translate for him immediately afterwards.

There’s no transcript because I have no idea what the hell he’s saying. (And, frankly, neither does she.)

Who knew gibberish could be undone?

And who could’ve guessed that a few words in Christian Parseltongue would actually represent a freaking monologue in English?

I promise you it doesn’t make any more sense in context, around the 25:30 mark of this video.

August 22, 2019
Catholic Priest Arrested for Tying Up, Blindfolding, and Throwing Boy in Closet
Next Post 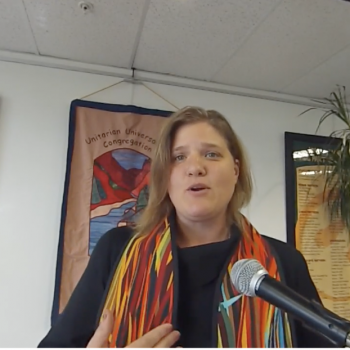 August 22, 2019 When Will Democratic Presidential Candidates Hire a Secular Outreach Director?
Browse Our Archives
What Are Your Thoughts?leave a comment