Last month, a federal court blocked a South Carolina school district from including Christian prayers at graduation ceremonies. It was the culmination of a six-year legal battle that could have been resolved much more quickly if the school officials weren’t so eager to push God onto those audiences.

And now the school district has decided… it wants to keep fighting. Because some Christians refuse to accept the fact that public schools aren’t extensions of their churches.

You can read about the lengthy history of the Greenville County School District’s religion problem right here, but the gist of it is that administrators were promoting religion at graduation ceremonies (more recently by allowing students to deliver the prayers), holding those events in chapels, and urging attendees to participate in the prayers.

U.S. District Judge Bruce Hendricks couldn’t trust administrators to just do the right thing, so last month, she laid out some very specific guidelines for how the District needed to proceed with graduation ceremonies. I’d paraphrase them like this:

1) No prayers can be listed in the official graduation programs. No euphemisms (like “inspirational reading”) either.

We can summarize that even more succinctly: Formal prayers at graduation are forbidden, and if kids choose to include prayers in their speeches, the administrator better have nothing to do with it.

And yet this week, the school board decided those rules weren’t clear enough. They claim the new rules cause “confusion” because they favor secular speech over religious speech — as if religious neutrality is somehow anti-Christian.

“Based on a review by our legal counsel, portions of the [injunction] also shift the district away from its practices of neutrality and instead infringes on student speech by requiring the district to disfavor religious speech as compared to secular speech,” [board chairperson Lynda] Leventis-Wells said.

They need a new lawyer, because I’m not one and even I can see that line of reasoning is flat-out wrong. The rules don’t infringe upon students’ rights, because they’re still allowed to invoke religion if they choose to. The rules just prevent administrators from promoting religion since that’s what they were doing earlier.

The court wants neutrality. School officials don’t. They have no idea what that means. They have no business challenging the court’s decision just because the board is full of incompetent people who think promoting Christianity ought to be the default position at graduations.

Sarah Henry, spokesperson for the American Humanist Association, responded to the new lawsuit in a statement:

We at the American Humanist Association are disappointed to see that Greenville County School District is choosing to protest a fair decision. Our legal team will not stop fighting for justice for all students who are constitutionally and morally entitled to a graduation celebration free of government-sponsored religion.

Students should not be made to feel like outsiders at their own public school, let alone at such a momentous occasion, as the courts have now repeatedly recognized in sound decisions. We will continue to defend the wall of separation between church and state and the rights of students to have a graduation ceremony that is inclusive of all, religious and nonreligious alike.

This is such a waste of time by the District. When are they just going to accept the fact that they lost? Students deserve better than the adults charged with making decisions for them. 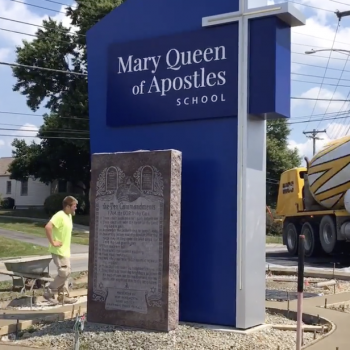 August 18, 2019
A Ten Commandments Monument at a PA Catholic School Now Has a New Patio
Next Post 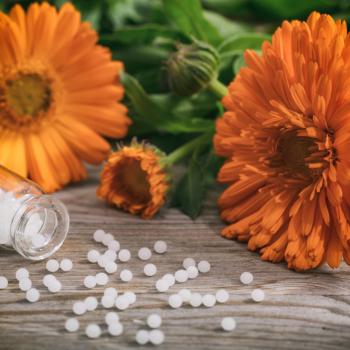