I can’t believe that headline is real.

“Mad” Mike Hughes, the Flat Earther who planned to launch a rocket high enough to prove Earth is flat, saw his launch fail due to a bad water heater he bought on Craigslist.

We have covered Hughes several times over the past few years, including when the stuntman/limo driver responded to my inquiries with a stern, “GO FUCK YOURSELF.”

I contacted him for a comment on this story, but no luck.

The Wile E. Coyote of Flat Earthers has been thwarted by local governments and bad planning in the past, but this time his nemesis was a bad water heater.

According to Hughes’ publicist Darren Shuster, the faulty heater that Hughes bought for $325 off of Craigslist wasn’t able to heat the water to 400 degrees Fahrenheit (200 degrees Celsius), the temperature required to create the steam to propel the rocket. Hughes paid $50 for the nose cone of the rocket, which he plans to launch off the back of a semi truck he was gifted. Shuster added that no one knows where the nose cone came from or what its original intent was, but Hughes modified it for its current purpose on the rocket. The launch is sponsored by hud, a casual dating app.

“I appreciate the support, love and excitement from everybody, and a delay will not stop my mission — the rocket is in place and needs a leak plugged up, so weekend is a go,” Hughes told Space.com.

Hughes is known for a few things, most notably craving attention and delaying his stunts. He’s also a big fan of changing his story, which is something he’s doing again. Now, he says the jumps have nothing to do with the Flat Earth (and they never have).

Instead, the press-obsessed hack says he’s dedicating his launches to Donald Trump.

… Hughes told Space.com that he was launching to this higher altitude because, simply, he is a daredevil.

“I believe the Earth is flat,” Hughes said. But “this flat Earth has nothing to do with the steam rocket launches,” he added. “It never did. It never will. I’m a daredevil!”

This “launch is about my personal desire to inspire my fellow Americans to help make this country great again,” he said in a press statement, adding that he hopes his feat will garner an invitation to the White House for himself and his launch crew.

I’ve never seen such blatant pandering, especially considering Hughes told me personally he wanted to eventually reach a height at which he could prove the Earth’s shape one way or the other. But now, the guy who always wants more attention is trying to get the attention of another man who loves attention. And conspiracies. And distractions. (For once, I wouldn’t be surprised if his wish came true.)

Still, it’s safe to say the current scientific reality regarding the Earth’s curvature will remain unchanged. 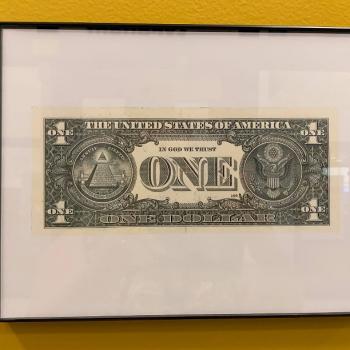 August 14, 2019
A KY School District Found a Brilliant Loophole for the "In God We Trust" Law
Next Post

August 14, 2019 AL GOP Senate Candidate Blames Gun Violence on Our Country's "Spiritual Deficit"
Browse Our Archives
What Are Your Thoughts?leave a comment