Comedian Sarah Silverman is in the news after voicing concerns about a Christian pastor who called for her death.

Because he did this more than a year ago, and because she linked to my older post about it, some background is helpful.

The pastor in question is Adam Fannin, who used to run Stedfast Jacksonville Church in Florida, an Independent Fundamental Baptist church. And he was referring to a comment Silverman made in her 2005 stand-up comedy special “Jesus is Magic.”

I hope the Jews did kill Christ! I’d do it again. I’d fucking do it again in a second.

That’s what known in comedy circles as a “joke.”

Silverman’s whole persona at that time was someone who said offensive things because no one expected them to come out of her mouth. Her fans knew she didn’t genuinely mean any of it, and her comedy has by and large shifted away from that in the years since.

But Fannin didn’t get the memo. In a 2018 sermon, he cited Silverman’s joke — without calling it a joke — and added that Silverman needed to die. (The video was taken down, but I saved a copy.)

… have you heard of this comedian, Sarah Silverman? You guys know what I’m talking about? She brags about it! “I’d do it again!” Listen, she is a witch. She is a jezebel. She is a God-hating whore of Zionism. I hope that God breaks her teeth out and she dies. She is a wicked person and she is, like, the perfect representation of religious Judaism… I pray that God would give her an untimely death, and it would be evident that it’s at the hand of God…

That… was a lot of hate directed at someone who made a joke. He wasn’t saying her jokes would lead her to Hell in the afterlife. He was calling for her death now.

And his followers are the sort of religious extremists who might want to help God out.

Perhaps because we just witnessed a right-wing domestic terrorist in El Paso murder 22 people, inspired by the anti-immigrant rhetoric of Donald Trump, Silverman pointed out that she was concerned about her own safety because of what Fannin said.

If I get murdered, start here: https://t.co/nScRRPIAJI

This is Adam Fannin of the Stedfast Baptist Church in Florida and he is going to get me killed. pic.twitter.com/I6Us59o59v

She also tweeted a longer explanation later that day:

… that’s America today. Incitements of violence based on lies and the disingenuous re-framings of truth.

She’s not wrong about right-wing extremism. But perhaps there’s some comfort in the fact that Fannin no longer works at that church. He was booted from Stedfast after a falling out with other IFB leaders and now runs a different IFB church, Law of Liberty Baptist Church, in the same city.

The church’s current pastor, Jonathan Shelley, explained as much in a video… but then went on to reiterate much of what Fannin said, including the death threats.

… I’m not surprised that [Fannin] would even rail on someone like you [Silverman], someone who’s very wicked and ungodly and, you know, hates the Lord…

Shelley said it was wrong to go after people for things they never said… before quoting Silverman’s routine as if it represented her actual views.

(What the hell is up with these people and God breaking people’s teeth…?)

Anyway, sleep soundly, Sarah. Adam Fannin no longer works there but the new guy wants you dead, too.

In all seriousness, keep in mind that these IFB preachers says similar things about LGBTQ people all the time. They even held a conference recently — on the anniversary of the Pulse nightclub massacre, no less — during which they gleefully talked about how LGBTQ people deserved to be put to death.

So maybe the one bit of consolation for Silverman is that they’re not singling her out because they want everyone who doesn’t think like them to be executed. (See? Don’t you feel better already?)

In any case, she’s right to treat them as a terror threat since that’s exactly what these preachers are. I fear it won’t be long before one of their followers snaps. And when that happens, you can bet these preachers will act just like Donald Trump, pretending that their words had absolutely nothing to do with their followers’ actions, even though two dots are never very hard to connect. 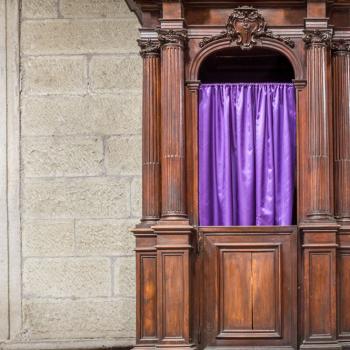 August 10, 2019 Kentucky High School Gets Rid of "Bible Literacy" Class Due to Legal Concerns
Browse Our Archives
What Are Your Thoughts?leave a comment