Christian Writer: God Allows Mass Shootings So We’ll “Return to Him in Prayer”

Every mass shooting seems to brings out conservative Christians eager to outdo their colleagues in the contest of who has the dumbest possible reaction to the atrocity. We’ve already heard Texas Lt. Gov. Dan Patrick blaming video games and a lack of forced Christianity for the El Paso shooting.

Now Christian author Eric Metaxas, last seen comparing gay people in love to pedophiles, is chiming in with his own brand of faith-based bullshit.

This morning, he blamed the shootings on the “spirit of the anti-Christ” and then offered an odd justification for why God allows such violence to continue even if He has the power to stop it.

The spirit of mass-murder is the spirit of anti-Christ. Instead of pointing fingers at each other & sharing in that foul spirit, let us turn to God in repentance. Can it be that He has allowed this evil so that we will return to Him in prayer & repentance? #jesus #severemercy

Can it be that He has allowed this evil so that we will return to Him in prayer & repentance?

He may see this as rationalizing God’s will, but it’s a horrible argument that ought to backfire on him. What sort of cruel, malevolent, blood-lusting God would permit the violent deaths of dozens of people in order to get other people to start believing in Him?

Even if that God existed, He wouldn’t be worth worshiping. Consider how demented Christianity would have to be to pretend God is perfectly fine with letting innocent people be slaughtered in order to convince Atheist Annie that she should accept His love? Hell, many of the people who died were presumably Christian already, and it didn’t do them a damn bit of good.

Metaxas tagged that post with “SevereMercy”… as if God’s just practicing tough love. His God’s a monster and it’s rubbing off on him.

Satan didn’t cause the shootings. The El Paso shooter apparently said he was motivated by the sort of anti-Hispanic rhetoric espoused by Donald Trump and supported by Republicans and the FOX News crowd — basically, all the people who say immigrants are a problem, refuse to curtail easy access to weapons of war, and act like they have a God-given right to kill other people if they want to.

What’s especially sad is that Metaxas is considered an “evangelical intellectual.” I guess when your religion’s most prominent leaders all hang out at the bottom of the barrel, scraping it doesn’t result in many good choices.

(Thanks to Kyle for the link. I’ve updated the post to specify that the anti-immigrant rhetoric was espoused by the El Paso shooter, but not the Dayton one.) 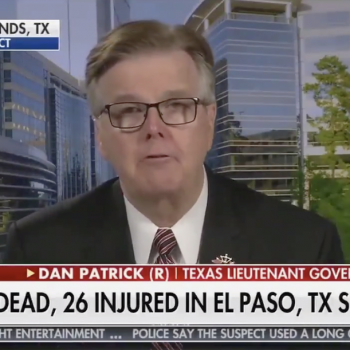