Rick Wiles: I Need $100 Million to Preach at Viewers Until Jesus Comes Back August 2, 2019 Hemant Mehta

Rick Wiles: I Need $100 Million to Preach at Viewers Until Jesus Comes Back

End Times broadcaster and anti-Semite Rick Wiles, recently seen explaining how pro-choice people would be eternally aborted by demons in Hell, said on yesterday’s episode of “TruNews” that he is in dire need of a few bucks.

Rick Wiles is now asking God for $100 million so that he can build a global media platform to guide humanity through the End Times until Christ returns. pic.twitter.com/NRM4zu7qNx

… I’ve upped my request… I’ve been praying, asking God for $10 million. I’m now… I’m now telling… I need $100 million. The vision He’s put in my heart, I need $100 million. It is a global vision to build a platform for the body of Christ to get us through to the End when Christ comes back. It’s going to take an enormous amount of money. I don’t know where it’s gonna come from. I don’t know who’s gonna finance it. But I know that God has unlimited resources. And He is my source, and my faith is in Him…

How do people not realize the grift? Why won’t they ever ask where the money is going? Why does Wiles need a nine-figure amount to build something that costs a fraction of that, and why does he think being on all these channels will lead to people watching him?

Hell, his videos are free right now, and he’s far from popular. Having a better studio and greater reach won’t matter if his content remains awful.

The sad thing is that any one of us could do incredible things with a million dollars. He wants a hundred times that, and for what? To build a network to spread bullshit until the apocalypse that will never come.

If God has unlimited resources, then Wiles should tell his viewers to send him nothing. But that’s never how religion works. 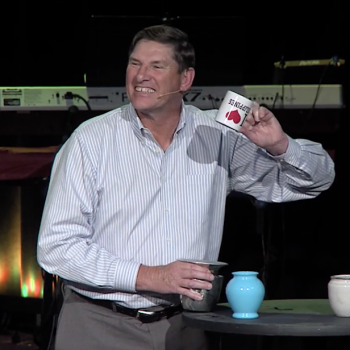 August 1, 2019
A Popular Pastor, Involved in an Abuse Scandal, Is Being Protected By His Church
Next Post