The indie rock band Mashrou’ Leila was scheduled to play at a popular festival in Lebanon known as Byblos. But because their lyrics were taken out of context by religious leaders, there were enough death threats against band members and festival attendees that the band was forced to drop out of the event entirely.

The band may push some boundaries and discuss “taboo” topics — what alternative and indies bands don’t? — but what religious leaders said about them was far worse than anything you’ll find in their music:

The office of the town’s archbishop had published a statement that said the group “undermine religious and human values [and] attack sacred symbols of Christianity”, while the country’s Catholic Information Centre called them a “danger to society”.

Here’s what the problem really is: The lead singer is gay and not ashamed of it. A video created by a priest said their band name “Leila” suggests “night of eternal tyranny.” There were doctored pictures spread online.

That’s when the gullible conspiracy theorists went on the attack:

Pressure from church groups was followed by threats of physical violence from social media users, some of whom said they would stop the show by force if it went ahead. One Facebook user called for the band to be “showered with bullets”.

The band agreed to the cancellation — for everyone’s safety — but their statement online makes it clear they see all of this as a threat to free speech:

For the first time in the band’s history, the authorities questioned us about two of our songs, and took no measures to protect us. Even though the investigation concluded we hadn’t committed any criminal offenses, the attack and threats kept growing. Very few listened, and often we were not allowed to speak for ourselves.

We continued to be attacked, while everyone who wanted to turned into judge, jury, and executioner. This goes against the logic of a state in a way that strikes us at the core of our sense of security and ability to create art.

They did express “genuine regret” for anyone who felt targeted by their music, but reiterated that much of that feeling was the result of smear campaigns from their enemies and not their actual intent.

The end result is that faith-fueled paranoia created an environment of hate and fear. Rather than spread the truth, the people best known for living in fantasy worlds ran with the lies until lives were at stake.

The cancellation may have been the best solution to avoid a potential disaster, but the fact that a smear campaign followed by threats was able to derail the band’s appearance creates a horrible precedence for the future.

(Thanks to Aram for the link)

August 1, 2019
A Group of Progressive Christians Is Pushing Back Against Christian Nationalism
Next Post 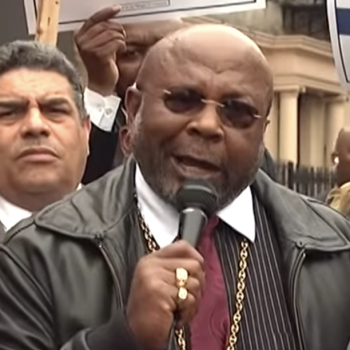