The headlines say that singer Katy Perry just lost a major copyright case involving her song “Dark Horse,” but the details are so worth a deeper dive.

Back in the day, Katy Hudson was a Christian singer no one knew about. Then she shed the good girl image, kissed a girl, changed her name, and became the most followed person on Twitter.

But the lawsuit in question here used her Christian past against her.

The men claimed that Perry — along with singer Juicy J (Jordan Houston) and a team of songwriters/producers — stole the eight-note riff from their song for “Dark Horse” (listen beginning around the 0:19 mark):

The most notable part of the Christians’ 2014 lawsuit explained the relevant injuries:

… Defendants unlawful actions have caused irreparable harm to Plaintiffs’ reputation and the reputation of the Joyful Noise song within the Christian gospel music world by, among other things, creating a false association between the music of Joyful Noise and the anti-Christian witchcraft, paganism, black magic, and Illuminati imagery evoked by Defendants’ Song, especially in the music video version.

Riiiiiight. Because when you hear Katy Perry, you think Illuminati, witchcraft, Harry Potter, goth people, and magical potions… and that all transfers over to Jesus.

Yet somehow, the jury members this week were swayed by the explanation of infringement given by Flame’s DJ, Cho’zyn Boy?

“What listeners are hearing is Katy Perry’s ‘Dark Horse’ at 66 beats per minute and they’re hearing Flame’s “Joyful Noise” at 76 beats per minute,” he said. “When they’re separated, they seem a bit different, but when you bring them to the same tempo and you just change her pitch down one octave, they’re identical… When things are that similar, it’s hard to dispute.”

See? I know they don’t sound totally alike, but if you speed it up and change the pitch, there you go! (I’m just like Steph Curry, too. You just have to add some height and speed and muscle and talent and there you go. We’re practically twins!)

Whatever the case, it worked:

After a weeklong trial that included testimony by Perry and her longtime producer Dr. Luke, the nine-person jury returned a unanimous verdict that Perry’s song had infringed the copyright of “Joyful Noise,” a 2008 song by the artist Flame, whose real name is Marcus Gray.

The next step, beginning today, is determining how much Perry’s side owes.

The weird thing is that there’s far more similarity between Perry’s “Roar” and Sara Bareilles‘ “Brave” (which came out first) — and Bareilles laughed off the notion of any lawsuit when her fans complained about Perry’s song.

Whether or not this is actual copyright infringement, it’s hard to imagine anyone hearing Perry’s song and thinking less of the Christian artists in question. The lawsuit brought far more mainstream attention to their song than “Dark Horse” ever did.

July 29, 2019
The Complicated History of the Pledge of Allegiance | Episode 3
Next Post 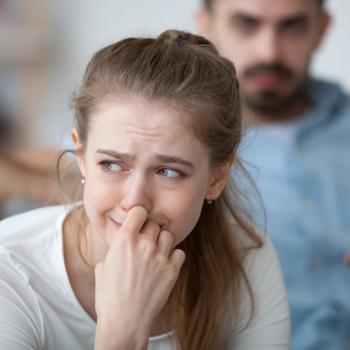