A 71-year-old man in Tennessee will probably die in the coming days.

He made two final requests of his son, Jessie Goodman. He wanted his funeral at Lee’s Chapel Baptist Church in Sweetwater, which was the first church he ever attended, and he wanted Jessie to sing the hymn “The Anchor Holds” at the service. Simple enough.

Jessie gave the church a call and everything seemed to be in order for the eventual service… until Pastor Jay Scruggs found out Jessie was in a same-sex relationship.

Now Scruggs is refusing to hold the funeral — for the straight father — because I guess he doesn’t want to get gay cooties or whatever fictional disease Christians fear.

“As long as I was going to take part in any way, he [Jessie’s father] could not have his service there,” said [Jessie] Goodman.

Goodman says the church’s pastor, and some of its members, don’t want him or his fiance [Brandon Smitty] to be involved in the service because they’re gay.

We called Lee’s Chapel Baptist Church’s Pastor Jay Scruggs to see if this was true.

Pastor Scruggs had no comment, but did say he would talk with us after Jessie’s father is in the grave.

That Christian compassion never gets old…

What’s he going to say after the father is dead? “No” in a louder voice?

One church member told Jessie he could have the funeral there as long as his partner didn’t attend… which seems vindictive more than anything. Even if his partner isn’t there, Jessie is still a gay man. And considering that a funeral is for the living, not the dead, to tell a member of the family (officially or not) that he’s banned from a funeral is just cruel more than anything.

Take a look at how Jessie and his partner talked about this on Facebook:

That’s the kind of love these other Christians lack.

When Goodman broke the news to his father that he would only be able to honor one of his final wishes, he told the news station his dad was devastated.

“He did know that his funeral wouldn’t happen there, and he had a very hurt look on his face when we told him that,” said Goodman.

Leave it to religion to find a way to make a dying man suffer even more.

The Southern Baptist Convention says Lee’s Chapel Baptist Church isn’t affiliated with them, so it’s unclear what kind of church it is. (It could be an Independent Fundamentalist Baptist church.) But when this kind of cruelty is baked into the beliefs, it’s hard to imagine the congregation will revolt in any meaningful way.

Jessie said on Facebook that his father was a pastor and a “well respected man of God.”

None of that seems to matter to Scruggs or the Baptists in his church. 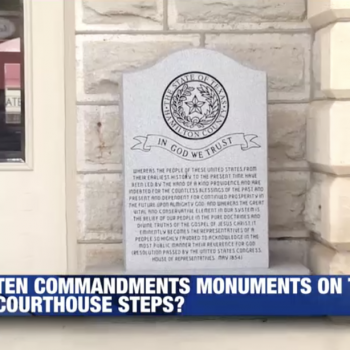