After Pastor’s Sex Scandal, Willow Creek’s Leaders Are Running From the Facts

How many second chances does a scandal-plagued church need before members finally admit the leaders will never get it right?

Willow Creek Community Church has had more than a year to get itself on the right track, but it refuses to come to terms with all of its problems. In March of 2018, we learned that Bill Hybels, the founding pastor of the prominent evangelical church outside of Chicago, had overstepped his boundaries with multiple women. Months later, there were more stories about how he sexually harassed his assistant for years in the 1980s.

When those initial stories broke, Hybels denied the allegations to his congregation while flanked by his handpicked replacements Steve Carter and Heather Larson. He said the church elders had investigated the situation and he was cleared of any wrong-doing. And the congregation gave him a standing ovation.

By the end of the years, those replacements had resigned — as had all the elders.

During all this time, the victims were called liars. They were treated as if they had coordinated to take down a prominent pastor. Their stories weren’t taken seriously until mainstream media reported on what happened — and even then, many church members refused to believe them.

The (new) elders held a meeting Tuesday night hoping to put closure on more than a year of scandal. It was meant to be a night of reconciliation. Hybels wasn’t invited.

The takeaway for some, however, is that the elders are just trying to sweep everything under the rug instead of addressing the church’s problems. The leaders never talked about what Hybels did; that means they didn’t confirm what the journalists had reported, allowing for lingering doubt. They never even mentioned Hybels’ name.

Going into the service, Rob Speight, a church member who describes himself as an advocate for the women who have come forward, said that elders have never given a detailed account of their allegations against the former pastor and that other churchgoers might not be willing to move on if they knew the full extent of those accusations.

The service was what he expected, he said: “A lot of platitudes with virtually no substance.”

The most damning response may have come from former teaching pastor Nancy Beach, who wrote that she was “stunned and devastated” by how little was said.

… They never spoke specifically about the information they hold. No names were spoken, including the name of Bill Hybels.

Whereas in March of 2018 there were two public meetings where several of us were labeled as colluders who mounted a campaign to bring down the church, and where the women were called “liars”, this meeting did not name any of the sin and abuse and deceit and failed leadership. Nothing was owned. No apologies were offered. They just taught about reconciliation.

Beach offered a long list of things she hoped to hear, including an explanation of why the investigation was so flawed, how Hybels demanded “his email evidence be destroyed,” and an admission of the “severe cost of the abuse and harassment on the lives of all the women involved.”

She got none of that. And that’s after she and the other victims shared their stories — again — with those new elders.

At a time when the Catholic Church and Southern Baptists have failed, repeatedly, to address sexual abuse in their institutions, what happened at Willow Creek was shocking. But if there was any church that might have been able to set the standard for how to handle this kind of crisis, it would’ve been Willow Creek. They’ve been the gold standard for evangelical churches for decades.

But instead of meeting the challenge with transparency and humility and honesty, they responded by saying the word “God” a whole bunch of times as if that magically makes everything better.

At this point, anyone who’s giving money to Willow Creek should just cut out the middleman and buy the earplugs themselves. It’s clear they have no desire to hear anything that might pierce their Christian fantasy. 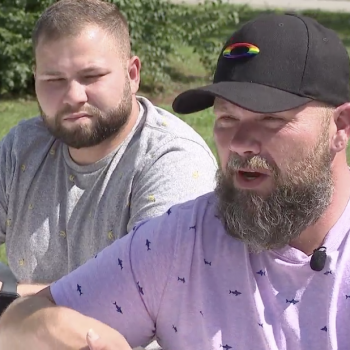