Survey: Jews and Atheists Have More Religious Knowledge Than Christians

When it comes to basic knowledge about what different religions teach, Jews and atheists know more than every kind of Christian.

That’s the bottom line in a new survey from the Pew Research Center, which asked 32 questions testing everyone’s religious knowledge. (You can take the quiz right here.)

Let’s discuss the results, then get into what the heck is going on here.

Only 9% of people got a score higher than 75% — which doesn’t sound all that impressive — but Jews, atheists, and agnostics fared better than Christians overall.

None of those scores are worth bragging about. We’re a nation of religious people who know nothing about religion.

Still. It’s telling that the people who reject the most popular brand of religion in the country are the ones who know more facts about faith. (For what it’s worth, atheists knew more than agnostics, and agnostics knew more than “Nones” in general. Why do historically black Protestants score much lower than everyone else? Arguably because their churches often focus on applying religious principles to social issues rather than focusing on individual stories.)

Some of the results, you could have predicted. In general, college graduates knew more than people who didn’t finish high school. Christians who attended a ton of Sunday school knew more about Christianity than those who never went. People who have friends of different religions know more than people who live in a religious bubble. Most Americans know specifics about Christianity but only the basics about other religions. They are familiar with what atheism means. They also greatly overestimate the percentage of Jews and Muslims that live in the U.S.

None of that is surprising.

Here’s an interesting tidbit, though: It turns out the higher you scored on the quiz, the more “warmly” you felt about nearly every group, including Buddhists, Jews, Hindus, and atheists. The more you understand about religions as a whole, it seems, the higher opinion you have of certain belief systems.

But there was one exception.

The people who aced the exam had a much lower opinion of evangelical Christians compared to the ones who royally flunked it. 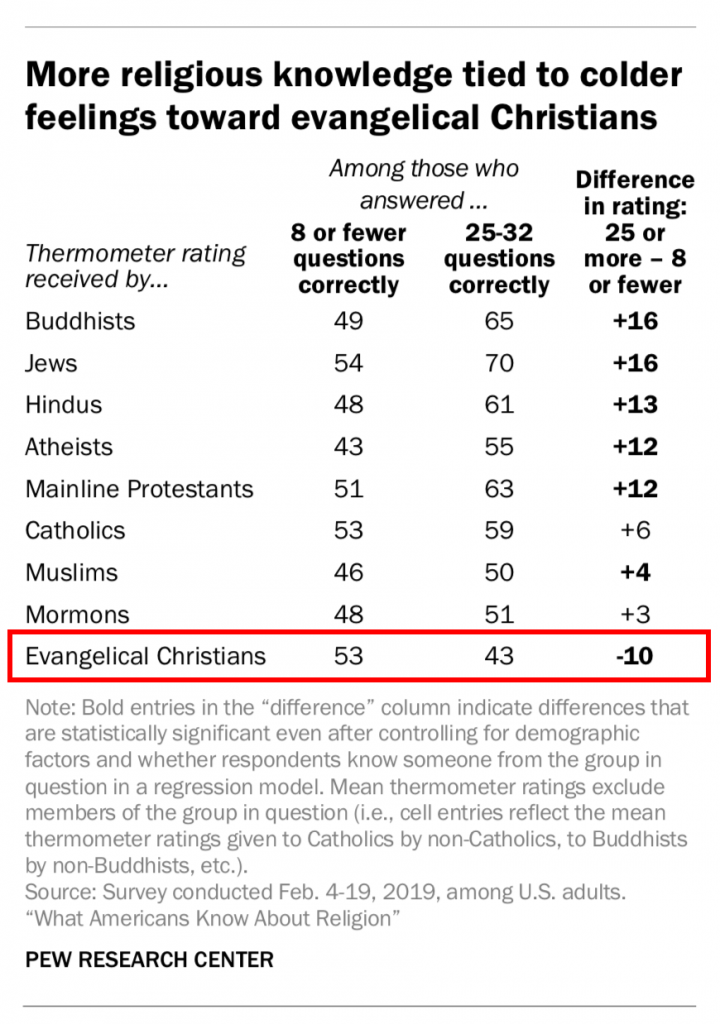 Why is that? I would say it’s because when you understand what Christianity teaches (Be like Jesus!), and then look at what evangelicals do in the name of God (Be like Trump!), you realize there’s a huge disconnect and get turned off by them.

Also surprising is how only 50% of Catholics understand their own religion’s belief that consecrated communion wafers are literally the body of Christ. Almost everyone else thought it was a metaphor… which would make a lot more sense, but it’s not what the religion teaches.

Similarly, only 20% of all Americans know that Protestantism says salvation comes through faith alone. Which is kind of the main point of that whole Jesus story.

One of the questions asked what the Constitution says about religion “as it relates to federal office holders.” Obviously, the answer is that there’s “no religious test necessary for holding office”… but only 27% of people got that right. 12% of people were like Roy Moore‘s former campaign spokesperson, assuming elected officials were required to take an oath on the Bible.

I would take issue with one question that asked people to define what “agnostic” means. The correct answer, according to the survey, is someone who “is unsure whether God exists.” That makes it sound like agnosticism is somewhere on a spectrum in between atheism and God-belief… instead of what it actually is: a term that addresses a different question entirely. Still, given the other options, that’s probably the best response.

Is this quiz the best way to gauge what people know about religion? Maybe not. Do you really learn about how religious people live their lives if you know which biblical woman saved Jews by “appealing to the king”? Not really. But considering the diversity of beliefs even within religious groups — to the point where there’s no single “Christian” position on abortion, evolution, or the age of the Earth that everyone would agree with — these questions give us an objective take on a variety of religious myths.

If all of this sounds familiar, it may be because Pew ran a similar survey in 2010. The results back then weren’t all that different: Atheists/agnostics (one group at the time) scored the highest, closely followed by Jews, and then came every Christian denomination.

Pew says that the two surveys can’t really be compared, though. Only 12 of the questions overlap and even those were modified. Also, the 2010 survey took place over the phone while this one took place online. Finally, the new survey included a “not sure” option for every question, which wasn’t available in 2010 (unless the participants volunteered it as a response).

So what can we learn from all this? I’m not surprised that atheists scored as well as we did. One of the reasons many of us left religion is because we knew enough about them to understand why they’re all illogical. We know what we’re rejecting! We can’t challenge religious beliefs unless we know what those beliefs are. As the saying goes, if you want your kids to become atheists, read them the Bible.

Also, atheists and Jews pay close attention to how religion impacts the world — since we’re often on the receiving end of Christian influence. We have to know what Christians believe because it ultimately hurts us. Those of us who take our beliefs seriously don’t get the luxury of being able to ignore Christian mythology. 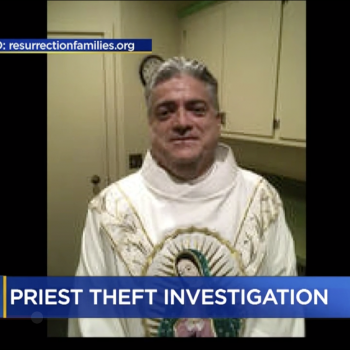 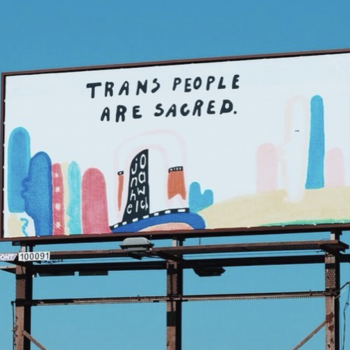