“Religion was used against these girls,” a judge said as he denied bail to a megachurch leader with a slew of criminal charges and video evidence linking him to child sex abuse.

In a world where many child-abusing religious figures get off with a mere slap on the wrist, L.A. Superior Court Judge David Fields treated the issue with the outrage it truly deserves. Naasón Joaquín García, the leader of a million-member church called La Luz Del Mundo, who was arrested last month, was charged with child rape, human trafficking, and other serious crimes.

Now, Judge Fields has granted the prosecution’s request to deny García the possibility of bail. He did so mostly due to video and photographic evidence described in court:

State law enforcement officer and forensic examiner Steven Stover testified during a Superior Court hearing on Monday that the video, which he said was found on an iPad that officials had seized from Garcia, depicts the defendant having intercourse with a woman while she performs oral sex on an underage male.

Stover also said that he had found child pornography on an iPhone that had been taken from Garcia — a man church followers call the “apostle” of Jesus Christ. One video, he said, depicted four females “of a very young age” lying nude on a bed performing oral sex on each other.

On Tuesday, that was enough for Superior Court Judge David Fields to grant prosecutors’ request to deny the possibility of bail to Garcia. The religious leader had faced a $50-million bail, believed to be the highest ever imposed in L.A. County. He has pleaded not guilty to rape of a minor, among other sexual offenses.

The preacher is also accused of convincing women to help him obtain the underage children and telling the girls that they must do what he says or they’ll be going against God.

Thankfully, the judge took that into consideration as well.

In a visibly angry voice, Fields said that he believed there is enough evidence to sustain a conviction and that Garcia would pose a risk to the community if he were released on bail.

“This is a man who preyed on young girls,” he said. “Religion was used against these girls. They were told that if they didn’t comply [sexually], they were sinning.”

Referring to claims by Garcia’s defense attorneys that a witness for prosecutors had been working to frame the apostle, the judge said, “These images are not planted on his phone by a conspiracy against him.”

While guilt needs to be proven, it’s perfectly reasonable to deny bail to potential flight risks. The evidence already in hand suggests enough reason for concern. The judge is right to deny him freedom at this point. 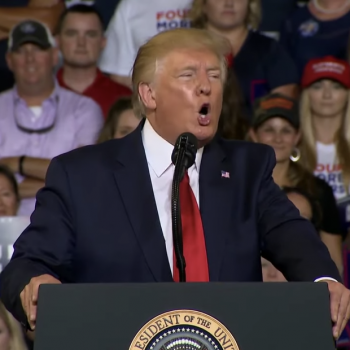 July 20, 2019
Despite Trump's Racist Rally, Some Christians Are Just Upset He Said "Goddamn"
Next Post