A Woman Assaulted a Brazilian Priest While He Spoke to an Audience of Thousands July 15, 2019 Hemant Mehta

***Update***: There are reports claiming the priest said, “Fat women don’t get into Heaven,” which led to the incident in question. I would still condemn the pushing, but I’m far less sympathetic toward the priest…

In a video that’s going viral in Brazil, a woman stormed the stage as a popular priest, Rev. Marcelo Rossi, closed out a religious camp in São Paulo with tens of thousands of people in attendance… and just flat-out pushed him to the ground like he was a football tackle dummy.

The incident occurred in the Catholic community of Canção Nova, a place that broadcasts religious shows online.

Don’t try this at home. Or anywhere else. Because it’s assault.

The priest thankfully suffered no injuries. The woman was arrested. Media reports say the unnamed woman has “mental disorders,” though no specifics were available, and we don’t know what her motivation was for assaulting him. Rossi declined to press charges against her. She was released from custody shortly afterwards.

In a short statement, Canção Nova said it regretted the incident, adding: “The priest is well. He was attended by the medical staff at the event and presided over the celebration to the end.” In a short video after the mass, the priest said he just suffered some pain but nothing was broken.

Veja, a Brazilian news magazine based in São Paulo, reported that Rossi referenced the attack after returning the stage. “It hurt, but pay close attention. I was just going to talk about pain but I did not imagine it was going to be like this,” the priest said, according to the outlet.

At least he has a sense of humor about the whole thing.

(Thanks to Valentin for the link) 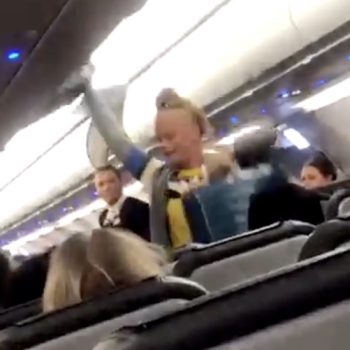