The War on Christmas has already started in Bethel, Connecticut, a city where local officials have no clue how to follow the law. Faced with the question of whether holiday displays should be allowed on government land — the simple answer would be “no” — they’ve offered the wrong answer three separate times in the dumbest possible ways.

The first bad response came in October of 2017. The city announced it would put a Nativity scene outside the municipal building. When an atheist asked what he needed to do to put up his own display, he was told he needed to fill out a formal application. There was a hurdle for him that Christians didn’t have to deal with. An attorney for American Atheists warned the city to fix its ways before a lawsuit had to be filed.

By 2018, the city decided everyone needed to fill out an application. Success! Equality! But the city’s Board of Selectmen said there wasn’t enough space to accommodate everyone who wanted a display, so only one would be allowed.

Simple, said First Selectman Matthew Knickerbocker. Whoever submitted the first application could have the spot. That proposal was announced at a meeting on a Tuesday night at 6:30pm and approved shortly after that.

And yet an hour before the meeting occurred, a local newspaper published a piece saying the town had already approved a Nativity scene and that Knickerbocker himself would be speaking at the event… How’s that for shady government?

American Atheists sent another letter to the city threatening a lawsuit and calling for the premeditated approval of the Nativity scene to be rescinded. It didn’t help that the instant-approval of the Nativity scene meant an automatic rejection of a banner that read, “This season, no matter what you celebrate or why, Happy Holidays! — your atheist neighbors” with American Atheists’ logo on it. 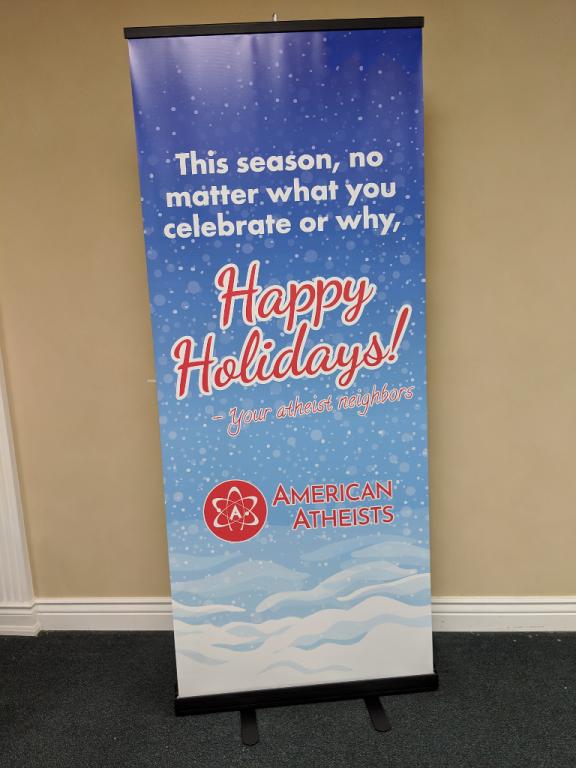 By allowing the Christian display and saying no to everyone else, a lawsuit was almost inevitable. You can’t have a public forum that’s closed off to everyone but Christians. Eventually, the city caved and just said yes to the atheist banner. A lawsuit was averted.

But that still left open the question about how they would handle these displays in the future. Did they really want an open forum when they couldn’t seem to get it right? They could always just say no to outside displays altogether, but that option seemed off the table.

That brings us to now.

When the Board meetings this Tuesday, they’ll decide whether or not to adopt a proposal developed by their Religious Display Committee. That policy brings back the application process — but if there are more applications than spaces, the committee wants to institute a lottery… but only for everyone else. The Nativity Scene would be automatically allowed. Same with the atheist banner. But if Jews and Muslims and Satanists apply for a display, they’ll have to enter a lottery.

They want to give Christians and atheists priority, while throwing everyone else under the bus.

That’s what their special committee decided was the best path forward.

“You can’t get any more inclusive than having an atheist display and a Christianity (display),” said Holly Heslin, chairwoman of the committee, before voting for the recommendation.

That’s an idiotic thing to say. Of course you can get more inclusive. Just include everyone who wants in. Obviously.

The town’s attorney already sounded the alarm against the proposal, saying that special consideration can’t be given to some groups just on the basis of previous placements. That’s like saying a Nativity scene should be permitted because it’s been there for decades. A tradition isn’t magically legal just because it hasn’t been challenged.

What I appreciate is that American Atheists isn’t happy with this policy recommendation either, despite being beneficiaries of it.

The proposal is a “non-starter” that would not pass “constitutional muster,” said Nick Fish, president of American Atheists, a national group that had criticized the town for initially rejecting the atheist banner and failing to have a policy on holiday displays.

“This is a textbook example of a proposal that has the veneer of neutrality but would only serve to further entrench the unconstitutional privilege that’s been extended to a single religious viewpoint,” Fish said in an email.

He recommended a lottery that would treat all applicants equally.

Fish is for a fair process even if that means the atheists end up getting bumped.

The fear for some, though, is that a fair system could mean no Nativity scene.

Tim Martin, a committee member who is part of the group that set up the manger, said he worried a lottery could lead to the creche being kicked off P.T. Barnum Square, which would anger residents who love it.

“A lottery basically says, ‘To hell with tradition. Throw it out the window. It doesn’t matter that people are going to be upset. We’re going to do this totally randomly,’” Martin said.

Yes. That’s how lotteries work. Randomness. Martin is just mad that Christians wouldn’t get special treatment under a fair system. He thinks To hell with Jews. Let them fend for themselves.

In fact, one Jewish resident has already raised money for a Menorah display. And if this lottery system is enacted, you can bet Satanists would want in, too. But a system that gives Christians a free pass, along with atheists (just so they shut up), isn’t legal, and atheists are the first to admit it.

The city needs to decide whether they want a fair system or if they would rather just end displays outside their buildings altogether. Those are their only options.

***Update***: The Satanic Temple’s Lucien Greaves tells me in a statement:

Creating a Satanic display for Bethel will be a particularly enticing project if it turns out that it will help us to help the town resolve any contention that might arise from anything less than a fully neutral public forum policy.

(Image via Shutterstock. Thanks to Pat for the link) 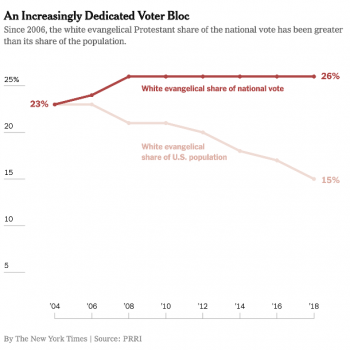 July 14, 2019
Despite Dwindling Numbers, White Evangelicals Make Up for It in the Voting Booth
Next Post 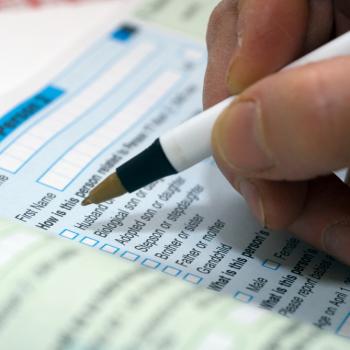 July 14, 2019 The 2021 Irish Census Is Still Screwing Up the Way It Asks About Religion
Browse Our Archives
What Are Your Thoughts?leave a comment