MAGA Cultist Admits Lying: “It Doesn’t Have To Be True; It Just Has To Go Viral” July 12, 2019 Hemant Mehta

MAGA Cultist Admits Lying: “It Doesn’t Have To Be True; It Just Has To Go Viral”

Instead of offering proof of any of his bizarre allegations, he confessed that spreading fake news is literally what he does and that’s okay because truth is irrelevant.

“Here’s what I am going to tell you, MAGA,” Dilley said. “It’s not your responsibility to correct fake news against your enemies. That’s the fucking left’s responsibility. Some of you guys don’t get this, you don’t know how to fight, you’re busy being virtue-signaling dickwads.”

“‘Dilley, why’d you do the fake news about Liz Warren and the mammie pot?’ Because fuck Elizabeth Warren, that’s why,” he continued. “I’ve told all of you: it doesn’t have to be true; it just has to go viral. And I stand by that statement when it comes to our enemies.”

“You think I know whether Megan Rapinoe is actually a Satan-worshiper?” Dilley asked. “Of course not. I have no idea … Whether she is or isn’t a devil-worshiper doesn’t fucking matter to me. That dirty piece of shit is a horrible representation of the United States of America and our values and if all I’ve got to do is link together a couple of fucking things that make her look like a Satanist to take some shine off that bitch’s moment, I’ll do it every time.”

And then, just in case there might be conservatives who think being honest matters, Dilley dismissed the very notion of honesty.

Talk about setting the bar low.

At least he’s up front about his dishonesty. He says what Kellyanne Conway just does. (No word if Dilley was lying when he said he needed to watch a gay legislator “suck a dick” in order to believe he was actually gay.)

Anyone who’s been paying attention to the MAGA crowd understands this is the strategy they use all the time. It’s the same one psychics and right-wing pundits use. Just tell lies. The more convinced you pretend you are, the more likely it is that your gullible followers will believe you. It works on the FOX News crowd. It works in megachurches. It works in multi-level marketing scams. It’s how pseudo-science spreads and it’s why actual journalists are having such a hard time breaking through against bad-faith actors, including those in the White House, who don’t give a damn about what the evidence shows.

If they pretend it’s true, there are people dumb enough to accept that. And those idiots vote, too.

July 12, 2019
As Satanists Go to Court Over Scottsdale (AZ) Invocations, Others Are Noticing
Next Post 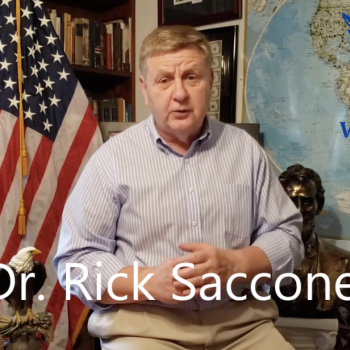