During his first term serving in the Illinois House, State Rep. Darren Bailey has made a name for himself as the most batshit crazy legislator in the state. He’s from the southeast part of the state, which is extremely Republican, so he’s been able to get away with just about everything because the minority party thankfully can’t do much in the way of legislation.

That’s why he freely admitted to pushing a bill to put “In God We Trust” signs in public schools because he wanted people to become “God-fearing” and find a moral compass. It’s why he agreed with a FOX News Radio host that schools needed to teach “heterosexual history classes.” It’s why he threatened to block legislation that would help transgender people. It’s why he can get away with spreading anti-vaccination propaganda on Facebook. It’s also why he referred to a pro-choice bill as one that involved “murdering babies,” proving that he doesn’t know the definition of either of those words.

More recently, he invited an invocation speaker, Pastor Cory Musgrave, who called on God to “judge Illinois for the sanctioned destruction of the innocent unborn.” Because rape victims who don’t want to give birth need another punishment from God in order to satisfy Jesus.

It won’t surprise you that Bailey just announced he wants to run for State Senator, taking over for another Republican who won’t be seeking re-election.

But perhaps even more disturbing is that Musgrave, the conservative Christian who thinks he knows better than every Illinois woman’s personal doctor, wants to run for the seat Bailey is about to give up.

Rich Miller, who blogs about Illinois politics, wonders if the invocation was part of the campaign launch considering he was tipped off about it from someone who handles publicity in that part of the state:

I now can’t help but wonder if Bailey was setting up his friend to run for his House seat with some sure-fired publicity over a controversial prayer.

It’s a part of the state where winning the Republican primary virtually guarantees victory in a general election, but we thankfully live in a state where sensible people outnumber Christian wingnuts like these. So even if both men win their races, they’ll continue being mocked members of a GOP minority rather than legislators who actually get things done.

July 9, 2019
An Evangelist Deleted an Anti-Gay Passage in Her Book, Angering Some Christians
Next Post 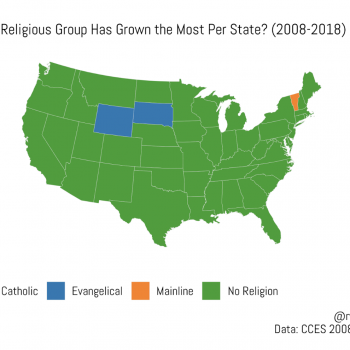 July 9, 2019 The Rise of Non-Religious Americans is Occurring All Over the Country
Browse Our Archives
What Are Your Thoughts?leave a comment