An Evangelist Deleted an Anti-Gay Passage in Her Book, Angering Some Christians July 9, 2019 Hemant Mehta

An Evangelist Deleted an Anti-Gay Passage in Her Book, Angering Some Christians

Christian author Beth Moore has become one of the few prominent evangelical women to push back against men in the church, creating a stir by preaching (!) on Mother’s Day (!!) and openly criticizing Donald Trump. (Hey, these are big deals in the white evangelical bubble.) 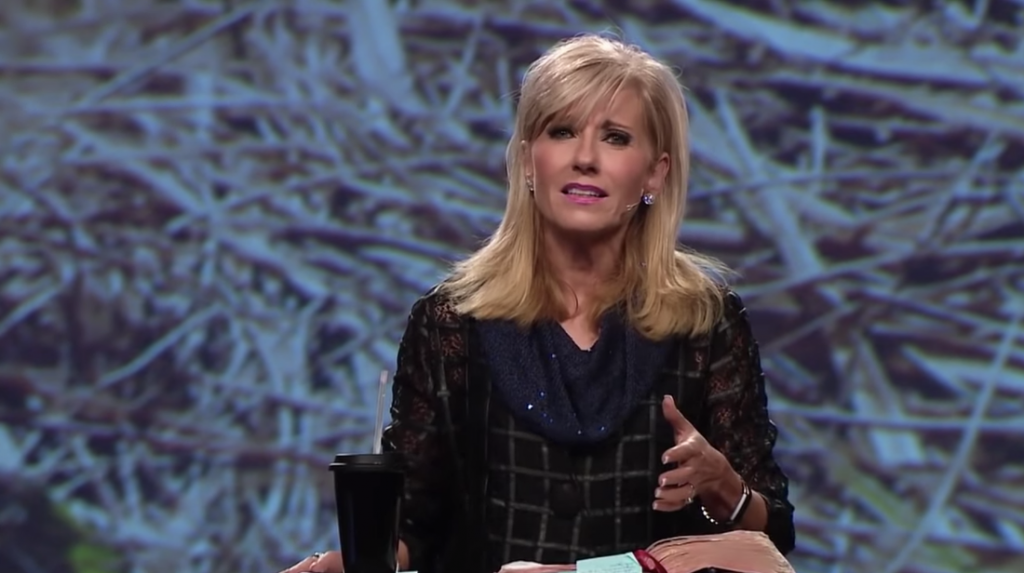 But in 2009, when she was a more traditional presence on the Christian circuit, she published a book called Praying God’s Word that included this passage on page 279 referring to homosexuality as a “deadly sexual assault of the evil one”: 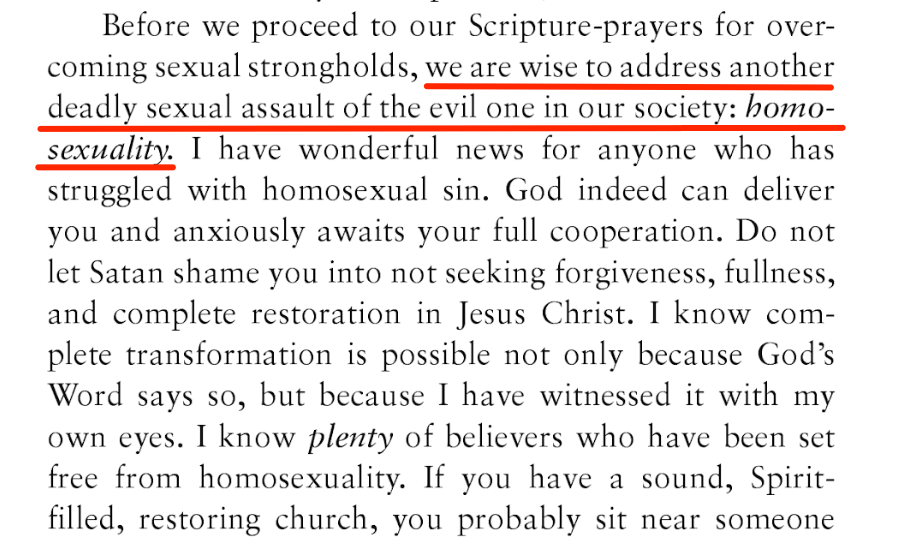 Before we proceed to our Scripture-prayers for overcoming sexual strongholds, we are wise to address another deadly sexual assault of the evil one in our society: homosexuality. I have wonderful news for anyone who has struggled with homosexual sin. God indeed can deliver you and anxiously awaits your full cooperation. Do not let Satan shame you into not seeking forgiveness, fullness, and complete restoration in Jesus Christ. I know complete transformation is possible not only because God’s Word says so, but because I have witnessed it with my own eyes. I know plenty of believers who have been set free from homosexuality.

For the past month, however, a number of conservative Christians have been trying to pin down where Moore stands on the issue today. Some women wrote an open letter asking her to confirm that “homosexuality is inherently sinful” among other questions. Moore’s response — a cowardly one, no doubt — was to avoid the issue altogether and say that she still believes sin is sin… whatever that means. (Those women also noted that she was openly friendly with a reporter who is gay. Shocking!)

Then came a bigger bombshell: While her 2009 book is now out of print, the Kindle version lives on, and that awful passage from Praying God’s Word is no longer in it. There are still references to homosexuality as sin, but that passage was the most egregious, and it’s gone.

Moore explained on Twitter that she made that decision after several years of contemplation:

Nearly makes me cry, David. It was not a fast decision. I took several years to contemplate what to do about it as I watched the damage it caused. It’s an old book but still widely used. It was not my intention but I made people feel demonized. I overshot Scripture by a mile.

None of that means she deserves praise. She’s taking the Joel Osteen approach to homosexuality: Simply avoid the topic and change the subject if anyone asks.

Based on everything she’s saying, perhaps she no longer believes homosexuality is a uniquely awful sin or that LGBTQ people can change their ways with God’s help, but her responses still leave open the possibility that she believes gay people shouldn’t be allowed to marry with the church’s blessing, and that gay people should remain celibate, and that they shouldn’t be able to adopt children from faith-based foster homes, and that Christian bakers should be allowed to discriminate against them, and that being transgender is a fiction, and everything else we’ve come to expect from conservative Christian bigots.

Unless she explicitly says otherwise, she’s hardly an ally to the LGBTQ community. She’s like those pathetic people who hold “I’m sorry” signs at gay pride parades while still clinging to anti-gay beliefs.

That’s still not good enough for conservative Christians who are basically treating her like a heretic.

(Moore announced over the weekend that she’d be taking “a bit of a Twitter break,” presumably to avoid the online backlash.)

It’s a telltale sign of the bigotry that remains among white evangelicals that when a prominent Christian figure isn’t anti-gay enough, they’re eager to throw her under the bus. She doesn’t deserve that. She may not be driving their bus, but she’s still a passenger. She’s still one of them. Just like the rest of them, she’s still doing plenty of damage by not openly supporting LGBTQ people and hiding behind non-answers.

Maybe some progressive Christians see it as a step in the right direction, especially for a popular Christian author, but for the rest of society, it’s quite honestly the least she could do. She deserves golf claps from the rest of us. Nothing more.

There’s a website we’ve referred to many times called Church Clarity that serves to inform people where various churches stand on issues concerning homosexuality. They’re not even trying to shame anti-LGBTQ churches; they just want churches to be clear about their positions rather than hide behind some fake mask of tolerance. (Their tagline: “Ambiguity is Harmful, Clarity is Reasonable.”) Right now, Moore is hiding behind that mask of tolerance. Doing so just makes everything worse. This shouldn’t be that complicated.

But the real story isn’t her lack of courage. It’s the over-reaction from conservative evangelicals who demand that True Christians™ share their faith-based hate.